From Oui (August 1974). As unlikely as this may sound to some, Out 1: Spectre enjoyed a week-long run in Paris at a Left Bank cinema (Studio Gît-le-Coeur) in my own neighborhood around the same time I wrote this capsule, so I had many opportunities to make return visits. –- J.R. 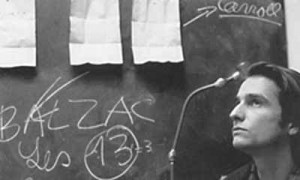 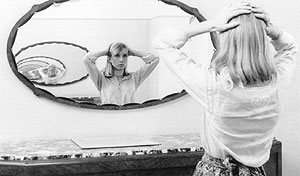 Out 1: Spectre. “Who are the 13?” jean-Pierre Léaud, when he isn’t impersonating a deaf mute on Champs-Elysées, is traveling around the rest of Paris, asking a variety of people this embarrassing question. He’s trying to solve the riddle of a secret society alluded to in a coded message – hidden relationships of power and influence lurking behind the normal surfaces of the everyday. Some of the reputed members of this sect include the owner of a hippie boutique (Bulle Ogier), a theater director (Michel Lonsdale), a lawyer (Françoise Fabian), and a novelist (Bernadette Lafont). Meanwhile, a small-time hustler (Juliet Berto) comes across additional evidence in a b atch of letters that she steals for blackmailing purposes. Although Berto and Léaud never meet, just about everybody else in Out 1: Spectre cross paths at one point or another. The movie’s geared to work that way, with each actor furnishing his own scenario and improvising dialogue while Jacques Rivette, the director, stages confrontations between them within his master plan. A game, a plot, a doorway into madness, or a foray into futility? This 255-minute charade, tailored to tantalize as well as stupefy, begins by telling at least five stories at once, gradually ties the threads together, and then proceeds to unravel them again. Much as Thomas Pynchon in Gravity’s Rainbow bears witness to mid-century paranoia by by turning imaginary plots into real ones and vice versa, Rivette has a chilling way of both suggesting explanations and dispersing them in this monumental, maddening epic. But the world he constructs around his frightening void is a recognizable one: Paris today. –- JONATHAN ROSENBAUM 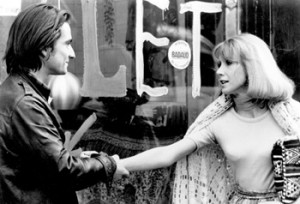