My interview with Alain Resnais in New York in December 1980 yielded three separate articles, written for Soho News, American Film, and Omni. This is an unedited draft of the latter; I can’t recall now whether or not it was ever published in some form, but I think it probably wasn’t. The other two, which were published, are posted elsewhere on this site, here and here. -– J.R. 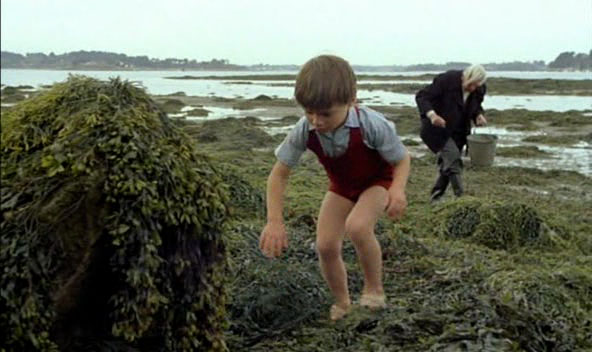 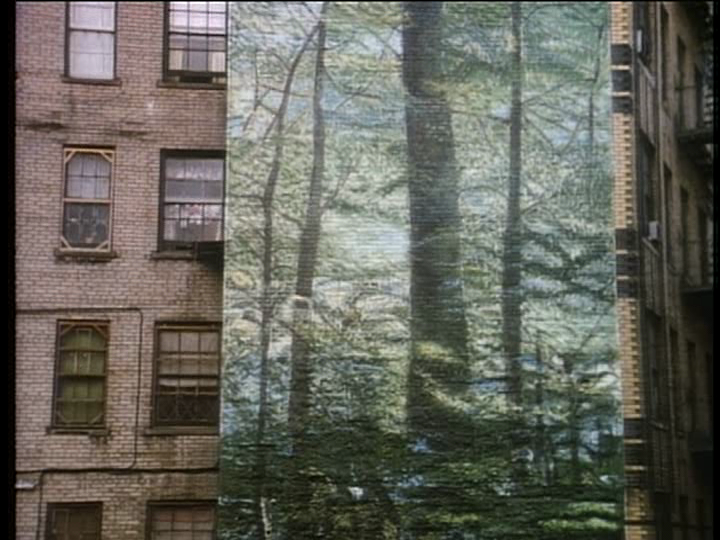 From the 42nd floor of Manhattan’s elegant Park Lane Hotel, where French director Alain Resnais has been holding court, Central Park in the winter looks remote and unfamiliar, like the terrain of another planet. It resembles Resnais’ unexpected smash hit Mon Oncle d’Amérique -– a unique, original blend of art and science –- by resisting precise description  almost as confidently as it invites contemplation and wonder. And if the angle of vision that helps to account for this strangeness faintly suggests the vantage point of an amused yet saturnine deity, gazing down almost nostalgically, something of the same ambiance seems to inform the relation of the 58-year-old Resnais to his haunting comedy.

A master director who’s also a master of indirection -– always electing to tell a story in a different offbeat manner -– Resnais has never scripted any of his own features, But all of them are unmistakably personal reflections, generally about the past. (Hiroshima mon amour, Last Year at Marienbad, La Guerre est finie, and Providence are among the best known.)   Where Mon Oncle d’Amérique differs most sharply from his former collaborations is in the fact that he enlisted the creative participation of a celebration French biologist, Henri Laborit, as well as a scriptwriter (Jean Gruault, a New Wave veteran). The resulting three-way symbiosis creates some interesting effects. 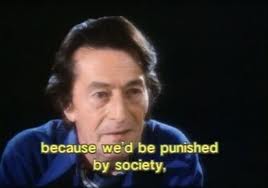 A scientist and prolific author eight years Resnais’ senior,  Laborit abandoned a career as a surgeon in his mid-thirties in order to devote his energies to basic research. From this work emerged at least two important discoveries and contributions in the early 50s –- the therapeutic technique of artificial hibernation (1951) and what has been called the first tranquilizer, chlorpromazine (1952). Honored by both sides of the cold war, he received the Albert Lasker Prize of the American Public Health Association and the Soviet Academy of Science’s Vichnewsky Prize in 1957, and became the director of a French euthenics lab the following year. His special interest is human aggression –- what it produces, and what produces it.

Resnais’ use of Laborit in Mon Oncle d’Amérique is at once novel and entertaining. After the movie begins rather like an old, impersonally narrated Disney True-Life Adventure -– but one that edges imperceptibly into a discussion of human behavior -– it quickly picks up three mini-plots as the documentary narration offers three characters (played by Gerard Dépardieu, Nicole Garcia and Roger-Pierre) whose separate biographies are presented as hypothetical examples. 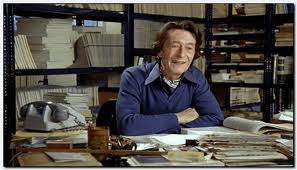 Then Laborit is introduced, rather like Walt Disney, in his office and lab surroundings, amicably lecturing the viewer about his theories concerning aggression. This lecture, later amplified by a series of rat experiments, is then interspersed with the film’s three fictional stories –- parallel lives which eventually bisect one another and become a single tale.

Resnais exhibits here his usual flair for composing beautiful shots that are at once richly suggestive (especially in color) and hauntingly symmetrical –- like those centering on a wild boar, a sewing machine, or  Russian dolls -– and then arranging them in mysterious mosaic-like patterns in the editing. But these opulent visual pearls are basically strewn about for kicks, not provocation; and all the minor puzzles that Resnais sets up are neatly solved along the way. 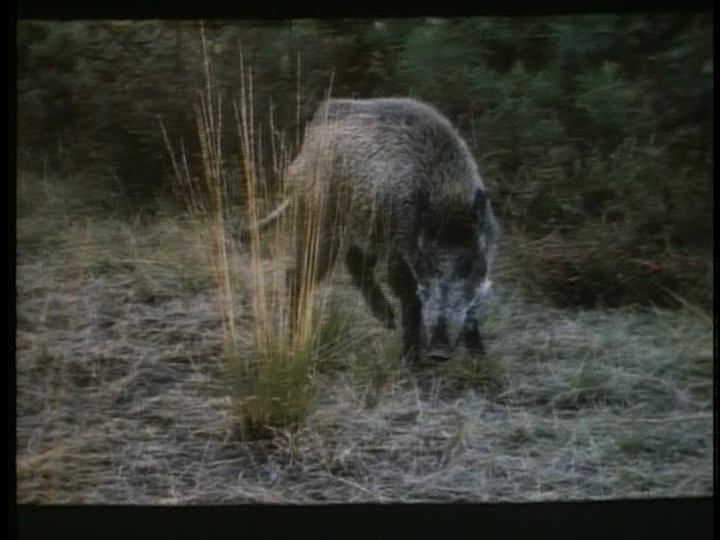 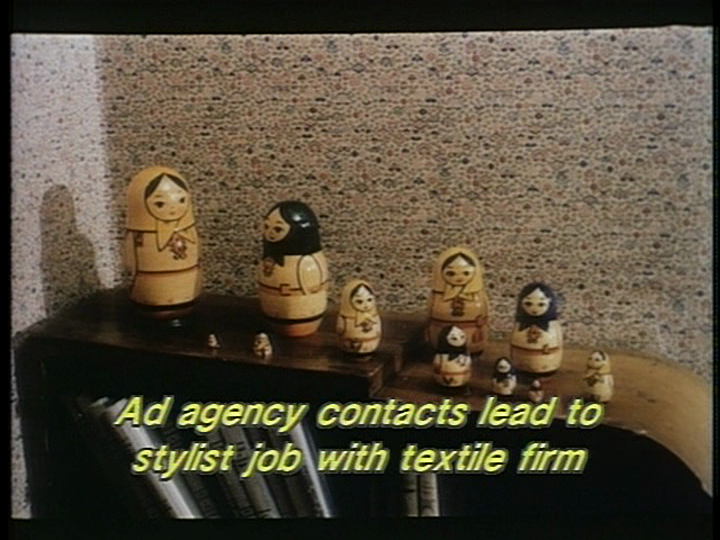 To round off the comic effect, each of the major characters is assigned a favorite French movie star -– Jean Gabin, Jean Marais, or Danielle Darrieux, respectively -– whose romantic star turns in various black and white film clips are often spliced into the story, revealing the models for how the characters behave and see themselves. Thanks to a carefully organized structure and a continuing lightness of tone, the various strands established (lecture, stories, odd shots, film clips) are smoothly interwoven, and not at all difficult to follow. 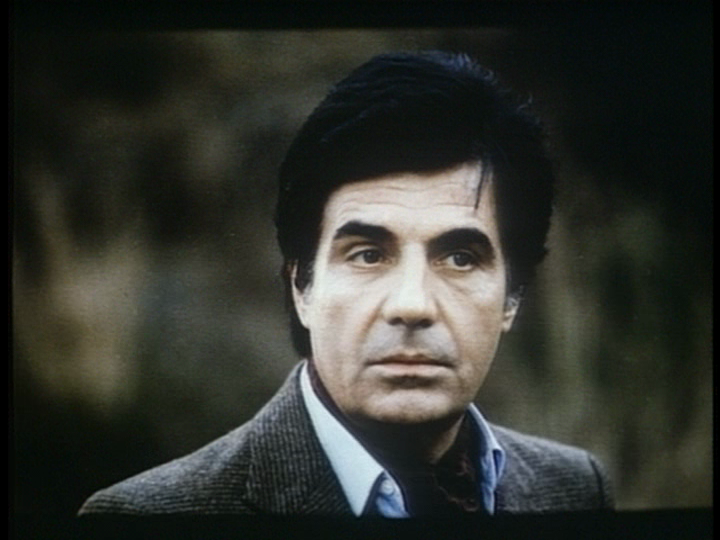 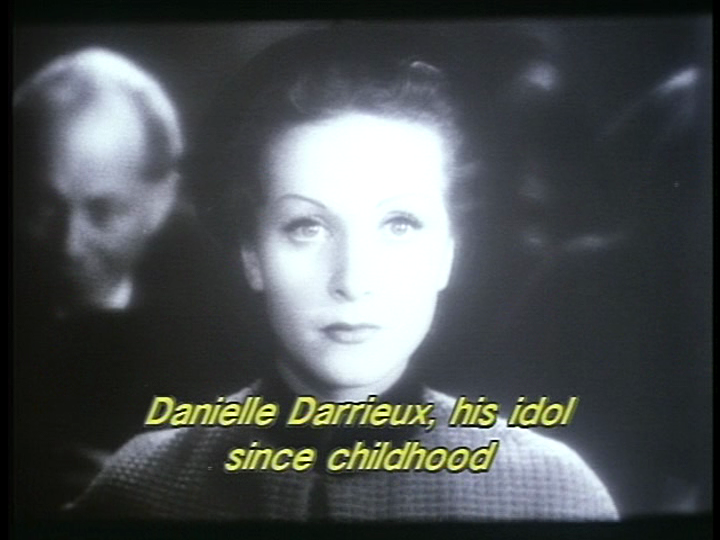 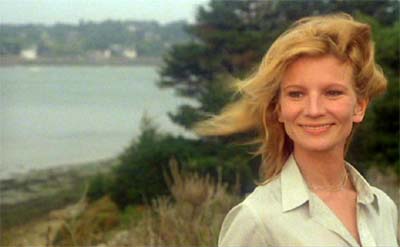 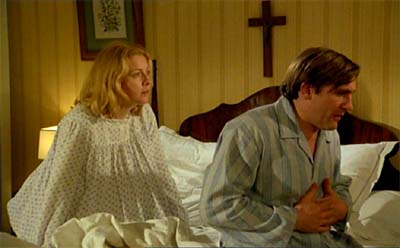 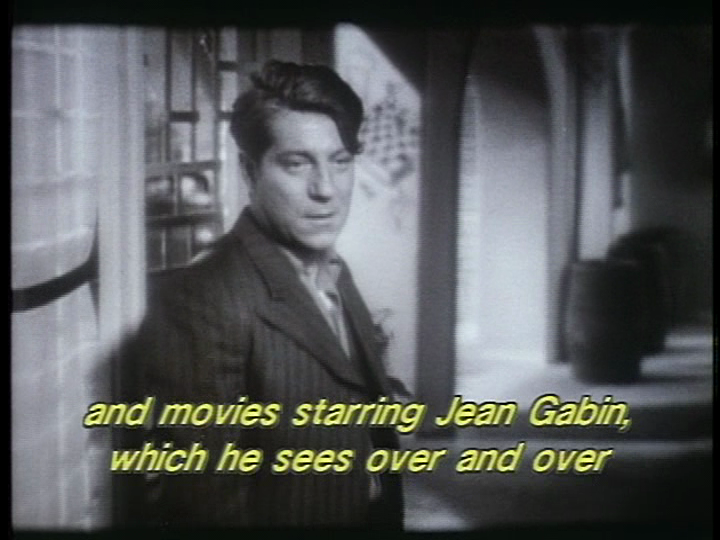 At one stage in the preparations, Resnais planned to make a movie that was made up of nothing but film clips. When I ask him about this eccentric, unfulfilled ambition at the Park Lake, he admits to it right away: “Yes, that was the first idea. Because reading Laborit’s book La Nouvelle Grille — which is available in the U.S. as Decoding the Human Message — I was surprised to see that, in my mind, each time he was describing human behavior or even animal behavior, I was seeing scenes from films! But after all, I’m sure that after the 80 years that film has existed, all aspects of human behavior could be found in films–or in theater or novels, for that matter.  But it would have been such a big job to use only clips! I think three years would have been necessary to do it. The budget maybe would have been higher, and I’m not a saint — three years in an editing room would have been boring. And the audience for that kind of film is very limited. So it wasn’t possible to keep that idea; but I think there are 26 clips in the film.”

“Actually, what I find quite extraordinary about the film,” I tell Resnais, “is that I don’t think science has ever been used the way it is here. I mean, the idea of a demonstration generating its own fiction and creative a whole parallel life to the lecture. And I enjoyed very much the freedom I had as a spectator, in terms of how I matched the lectures with the stories — there was no single or simple way of doing it.”

“I’m glad to hear you say that,” Resnais says, “because the freedom of the spectator is very important for me. And because I hope we have not been too didactic or dogmatic, after all.” He’s referring now to a discussion we’ve been having about Laborit’s behaviorism, some of which strikes my layman’s sensibilities as deterministic. Laborit’s concept of freedom, for instance, is expounded upon at some length roughly midway through Decoding the Human Message (St. Martin’s Press, 1977): “What we call freedom amounts, generally speaking, to the ability to respond to our primitive drives, which are already considerably alienated by the automatisms, prejudices, and value judgments of the social group and of the epoch in which we are integrated.” 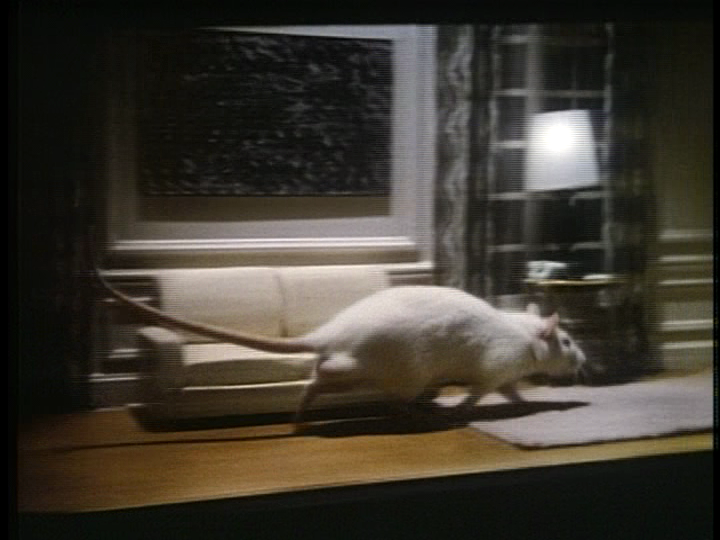 A little further on, Laborit — who elsewhere suggests replacing the famous French slogan “Liberty, equality, fraternity” with “Consciousness, knowledge, imagination” — argues that, “In reality, what we might call ‘freedom,’ if we are really set on keeping this expression, is the very relative independence that a human being can acquire by discovering, partially and gradually, the laws of universal determinism. Then, and only then, he can envisage a means of using these laws better for his survival…” 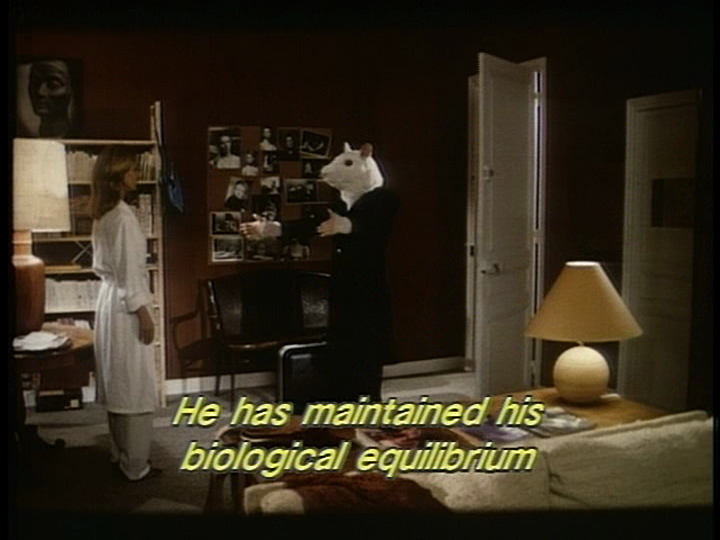 “Do you feel that if the fictional characters in this movie understood more about their aggression that their decisions and behavior would be different?”

“Yes!” he says emphatically. “They aren’t at all conscious of dominance or aggression; they never think about that — they just react. If Jean Le Gall (Roger-Pierre) knew the rules of the game when he has been humiliated by Janine Garner (Nicole Garcia) on the island — when she was more courageous than him, and walked through the sea to get a boat, maybe things would be different. But the only thing he can do, since he has been dominated, is to try to dominate her.  That’s why he says to her at the end of the scene that she was only interested in him because of his money. So if he was more conscious of his humiliation, he wouldn’t have said that.” Resnais shrugs. “Maybe they would have just embraced each other.” 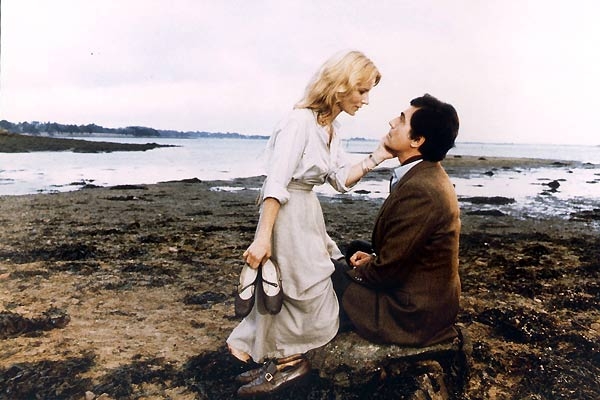 “What does Laborit mean in the film when he refers to an unconscious that isn’t Freudian?”

“He’s a great admirer of Freud. He said it’s fantastic what Freud discovered just by imagination. And a lot of what he’s written has been proven true by biology. It’s only that, for Freud, the unconscious is what we hide and repress, it’s all hidden impulse. For Laborit, the unconsciois is that plus all the things that we have learned to do automatically: I mean, a pianist whom rehearses for hours every day just to play a passage so he can do it automatically. Or if you’re working at a typewriter and don’t look at the keys because your finhers know it — that’s the unconscious, too. Laborit says that especially during the first years of one’s life, when the brain is developing, a lot of things are imprinted definitively in your mind which are there in the unconscious.”

“Some people have remarked that Laborit’s theories come very close to those of Konrad Lorentz.”

“Yes, of course; he is an admirer of Lorentz, too. But I don’t think Laborit would think he’s only expressing his own theories in the film. He’s just talking about biology and making a kind of summing-up of his works, including the works of all his other colleagues. He’s not saying, ‘I am telling you something new,’ just that, “I am trying to think about that some more.'”

“It seems that a viewer could actually see the fictional stories at some points contradicting Laborit’s theories.”

“Yes,” Resnais says, but then he pauses to think. “Not exactly contradicting, maybe. But I think the audience is free to discuss what Laborit is saying, and to see if it fits what the characters are doing. Of course, the film is built on a contradiction, I would say. Because the aim is to illustrate what Laborit says. But at the same time, while we were working on the script, as soon as the leading characters became alive for Jean Gruault and me, I said to Gruault, ‘Now let’s forget about Laborit. We’re going to talk about the characters only as characters — what is believable for us — and we’ll see what happens. We should not try to make them fit anything special, just let our imaginations work.'” 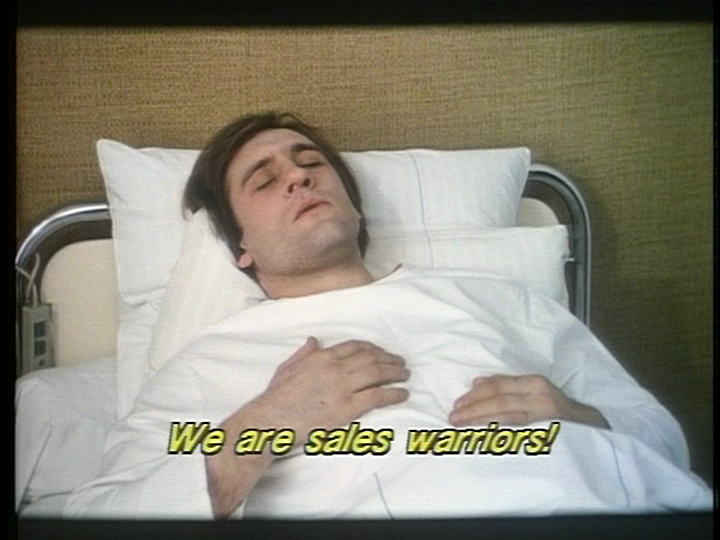