This was reviewed at one point or another for the Chicago Reader. — J.R, 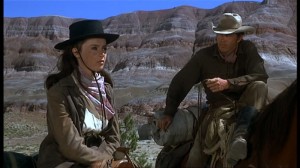 Monte Hellman’s remarkably hip avant-garde western (1967) was sold straight to television in the U.S.; while overseas it became a standard reference point for cinephiles, here, alas, it remains a cultist legend that’s never received the attention it deserves. A provocative and often witty head scratcher, it stars Jack Nicholson (who also produced) as a hired gun and Warren Oates, both at their near best, along with Will Hutchins and Millie Perkins. With its existentialist approach to treks through the wilderness, this is one of the key forerunners of Jim Jarmusch’s Dead Man. (JR)