Commissioned and published by Fandor in September 2010. — J.R. 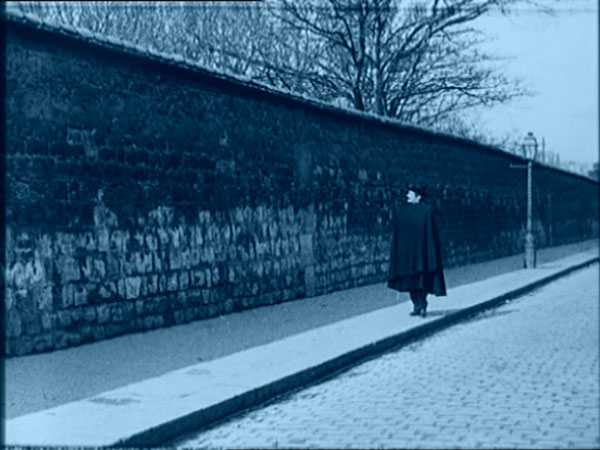 Teaching silent film in the mid-1980s at the University of California, Santa Barbara, I was astonished to discover I was the first teacher there who had ever shown a film by Louis Feuillade. Sadly, there was a good reason: at that time, only one Feuillade film was in distribution in the U.S. — Juve contre Fantômas (Juve vs. Fantômas) — and few if any of my teaching colleagues had ever seen it.

My own introduction to Feuillade, one of the most memorable filmgoing experiences in my life, was attending, on April 3, 1969, a 35-millimeter projection of all seven hours of his 1918 crime serial, Tih Minh, at the Museum of Modern Art -– along with Susan Sontag, Annette Michelson, and other enrapt friends and acquaintances. Part of the shock of that experience was discovering that even though Feuillade was a contemporary of D.W. Griffith — born two years earlier, in 1873 — he seemed to belong to a different century. While Griffith reeks of Victorian morality and nostalgia for the mid-19th century, Feuillade looks forward to the global paranoia, conspiratorial intrigues, and technological fantasies of the 20th century and beyond. Beyond that, he helped to create a kind of crime film all his own, described best by Alain Resnais: “People say there is a Méliès tradition in the cinema, and a Lumière tradition: I believe there is also a Feuillade current, one which marvelously links the fantastic side of Méliès with the realism of Lumière, a current which creates mystery and evokes dreams by the use of the most banal elements of daily life.” 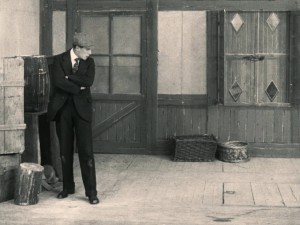 Ever since that MOMA screening, I’ve been a sucker for Feuillade’s crime serials, and after moving to Paris less than half a year later, I was able to attend Cinémathèque screenings of Les vampires (1915), Judex (1916), and Barrabas (1919). The New York Film Festival had already shown the first of these back in 1965 — back when Olivier Assayas, who would later fantasize a remake in his 1996 Irma Vep, was only ten–and the same festival would later show Tih Minh in 1980. But unless you happened to be around for those special events, Feuillade was little more than a vague rumor. 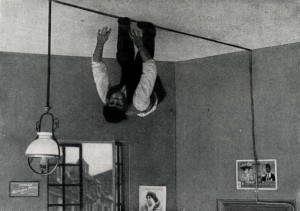 The five Fantômas films of 1913 and 1914—not really serial episodes, though some of them end with cliff-hangers, but separate films — mark the virtual beginning of what Resnais calls the Feuillade current. In May 1912, he’d already cast the title star of Fantômas, Rene Navarre, as detective Jean Dervieux, and this came after Victorin Jasset turned out a series of films about American detective Nick Carter — an earlier avatar of the improbably named American detective, Tom Bob, in the Fantômas series — between 1908 and 1910. And in early 1911, hack authors Pierre Souvestre and Marcel Allain started to issue one 400-page novel per month devoted to the scheming exploits of Fantômas, a series so popular that it would eventually comprise 32 volumes by 1913. 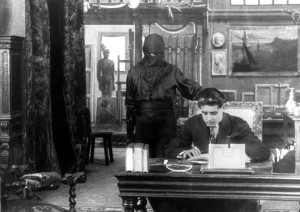 Leon Gaumont,  unlike some of his competitors, was leery of paying out any extra money to fund literary adaptations, but he was goaded into changing his mind once 20-year-old Allain announced to him that Pathé had offered 2,000 francs for the movie rights; given the huge success of the novels, Gaumont would ultimately shell out three times that amount to allow Feuillade to mount a film series, which was ultimately curtailed only by World War I. 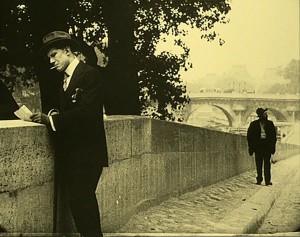 Far from complicating the novels, Feuillade took pains to simplify them in terms of character and incident, allowing for a certain grandiosity only when it came to staging climactic scenes, such as the gunfight amongst wine barrels in Bercy (which reflected Feuillade’s earlier profession as a wine merchant, much as Inspector Juve’s journalist pal Jérôme Fandor harked back to his earlier work in journalism), the attack of a boa constrictor, and the apparent dynamiting of Lady Bentham’s villa (actually Feuillade’s own home) in the second film, Juve contre Fantômas.

Many commentators have tried to account for the outsized success of the Fantômas novels and films by citing the popular exploits of the anarchist Bonnot gang, who operated in France and Belgium in 1911-1912, celebrated for their high-tech ingenuity (such as their use of automobiles and repeating rifles, neither of which was available to the police at the time). Since their first robbery occurred in Paris in December 1911, when the Fantômas novels were already well underway, one can’t see them starting the craze, although they undoubtedly helped to fuel it. Probably more to the point are the notions of crime as art and art as metaphysics that inspired such poets as Robert Desnos and Jacques Prévert, whereby cop and crook become periodically interchangeable and staid appearances deceive almost by definition, providing the early template for Feuillade’s master serials.