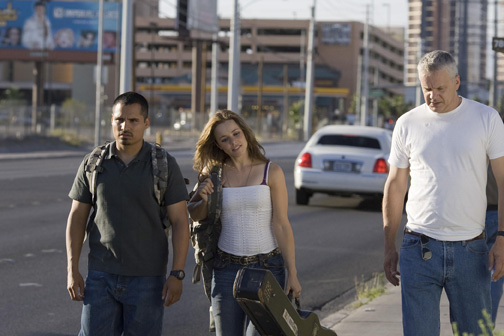 Seeing Neil Burger’s ironically titled third feature at the Toronto Film Festival a few days ago, I gradually come to realize that Burger can be classified as an auteur insofar as his three vastly different features to date can all be related to the same theme: the means by which powerless people assume power. (For a consideration of his first two features — the 2002 Interview with the Assassin and the 2006 The Illusionist — one can read my Chicago Reader review of the later film here.)

Three wounded U.S. soldiers in The Lucky Ones (a film scheduled to open in the U.S. later this month), all traveling “home” from Iraq, played by Michael Peña, Rachel McAdams, and Tim Robbins (see above), have almost nothing in common with one another except for their war service, yet they wind up getting entangled with one another for practical as well as existential reasons, sharing a rented car. What we gradually come to realize is that the reason why they went to Iraq in the first place is subtly tied to the fact that they have nowhere to go now — which is why they wind up forming a temporary and makeshift family with one another.

Such a story (which Burger coscripted with Dirk Wittenborn) easily could have slid into some form of sentimentality. But this never happens because the three lead characters keep surprising us — both in their lack of power and in the various ways they can bring limited empowerment to one another. And one very gradually comes to understand that what led the U.S. to occupy Iraq for obscure reasons — and to muddle things even further by calling this occupation a war — is closely tied to these characters’ shared dilemma. [9/12/08]