It’s been about 45 years since I last saw Pietro Germi’s Seduced and Abandoned (1964). I’m sure it already looked like a savage social satire when I was 21 or so, but one additional meaning it’s picked up in the interim is the devastating putdown it offers of The Godfather and its first sequel years before either one was made. (The second-best putdown—Coppola’s own The Godfather: Part III—would come much later.)

If memory serves, Germi’s earlier Divorce, Italian Style (1961) is funnier, largely because it’s less overflowing with bile than Seduced and Abandoned—and also no doubt because it has Mastroianni. But even so, I’m not at all surprised that Manny Farber would describe Divorce as an “unfunny farce”. What probably distinguishes Germi (1914-1974) most sharply from a Farber favorite like Preston Sturges (1898-1959) is the latter’s affection for even his dumbest and crassest characters, little of which Germi appears to permit himself. The hypocrisy of most of the small-town Sicilians in Seduced and Abandoned is too consistent and unvarying to allow for much indulgence, much less love or amusement. Even the title victim, played by Stefania Sandrelli, ultimately becomes a bit dehumanized by all the free-floating scorn, which eventually devolves into a kind of nightmare horror show, almost on the order of something like Rosemary’s Baby. [2/2/09] 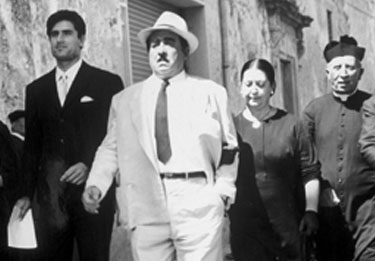