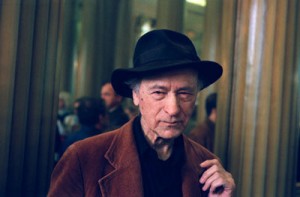 As you well know it was God who created this Earth and everything on it.  And he thought it was all great.  All painters and poets and musicians sang and celebrated the creation and that was all OK.  But not for real.  Something was missing.  So about 100 years ago God decided to create the motion picture camera.  And he did so.  And then he created a filmmaker and said, “Now here is an instrument called the motion picture camera.  Go and film and celebrate the beauty of the creation and the dreams of human spirit, and have fun with it.”

But the devil did not like that.  So he placed a money bag in front of the camera and said to the filmmakers, ‘Why do you want to celebrate the beauty of the world and the spirit of it if you can make money with this instrument?”  And, believe it or not, all the filmmakers ran after the money bag.  The Lord realized he had made a mistake.  So, some 25 years later, to correct his mistake, God created independent avant-garde filmmakers and said, “Here is the camera.  Take it and go into the world and sing the beauty of all creation, and have fun with it.  But you will have a difficult time doing it, and you will never make any money with this instrument.”

And the museums all over the world are celebrating the one-hundredth anniversary of cinema, costing them millions of dollars the cinema makes, all going gaga about their Hollywoods.  But there is no mention of the avant-garde or the independents of our cinema.

I have seen the brochures, the programs of the museums and archives and cinematheques around the world.  But these say, “we don’t care about your cinema.”  In the times of bigness, spectaculars, one hundred million dollar movie productions, I want to speak for the small, invisible acts of human spirit: so subtle, so small, that they die when brought out under the Klieg lights.  I want to celebrate the small forms of cinema: the lyrical form, the poem, the watercolor, etude, sketch, portrait, arabesque, and bagatelle, and little 8mm songs.  In the times when everybody wants to succeed and sell, I want to celebrate those who embrace social and daily failure to pursue the invisible, the personal things that bring no money and no bread and make no contemporary history, art history or any other history.  I am for art which we do for each other, as friends.

I am standing in the middle of the information highway and laughing, because a butterfly on a little flower somewhere in China just fluttered its wings, and I know that the entire history, culture will drastically change because of that fluttering.  A Super 8mm camera just made a little soft buzz somewhere, somewhere on the lower east side of New York, and the world will never be the same.

This text was presented at the American Center in Paris, February 11, 1996 and first published by agnès b. as a large format, 8-page artist’s magazine in point d’ironie, no. 1 (Paris, 1996). Thanks to Pip Chodorov for providing his full-length transcription.