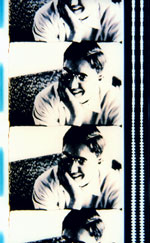 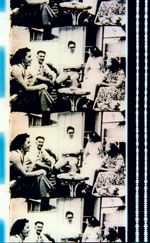 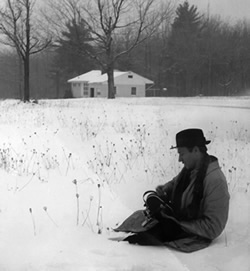 Reel 1: Images of Brooklyn filmed by Mekas shortly after he and his brother Adolfas arrive in America in 1949, accompanied by his off-screen recollections of people, places and events — mainly gatherings of fellow Lithuanians, in the streets and parks, at a picnic, a lodge in Stony Brook (Long Island), a baptism, a funeral, after a church service, and at a soccer game. The reel ends with two Lithuanian folk dances, followed by images of the dancers sitting in the grass (in Philadelphia, 1951). Reel 2: Recollections of the Lithuanian Nationalist and Communist movements in the early Fifties, including the theories of Prof. Pakstas, a parade, and speeches by Tysliava (a futurist poet), Kairys (signator of Lithuania’s Act of Independence in 1918) and Zadeikis (ambassador to Independent Lithuania), combined with more personal material about the Mekas brothers’ life in Brooklyn — ending with a New Year’s Eve party in 1953 and Mekas’ move to Manhattan. Reel 3: Images of friends; fragments of an unfinished film made by the Mekas brothers; the printing of Film Culture, and Mekas begging for money in the street to help finance it; Charles Levine’s footage of the shooting of Guns of the Trees; an exploration of Joe Jones’ set of mechanical drums; a gathering of poets at the Living Theater; the shooting of The Sin of Jesus. Reel 4: The Mekas brothers’ flat on l3th Street; a trip to Long Island with the Weinbergs; demonstrations and rallies at City Hall (against air raid tests), the Charles Theater, the Women’s House of Detention, Madison Avenue (against fallout shelters), Times Square and Fifth Avenue (the First International Strike for Peace); images of ice breaking in the Hudson River, spring, 1962. Reel 5: Four “screen tests” of friends in the street; a series of fifty-six “Rabbit Shit Haikus” filmed in Vermont during the shooting of Hallelujah the Hills; scenes at the FilmMakers’ Cooperative; a series of thirteen “Fool’s Haikus” filmed in Central Park; a visit to the friend of a friend at an asylum in Long Island. Reel 6: Tiny Tim singing; the premiere of Twice a Man; Mekas’ and Ken Jacobs’ footage of a trip to the Flaherty Seminar in Vermont with prints of Flaming Creatures and Blonde Cobra, where they wind up sleeping outdoors and filming the countryside and each other; visits to other friends; Prof. Oster demonstrating “moirees” to Dali and others; in succession, Jacobs’ and Mekas’ footage of an outing to Stony Brook. 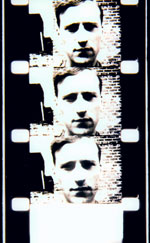 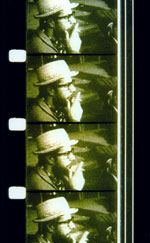 The revelation of Jonas Mekas’ Reminiscences of a Journey to Lithuania in 1972 — particularly in contrast to his Guns of the Trees, which was made a dozen years earlier — was the unexpected seriousness, candour, precision and even reticence of a voice that had previously been identified largely by its shrillness and stridency, in cinema as well as in the pages of Film Culture and The Village Voice. An uneven blend of poetry and posture, direct response and propaganda, Mekas’ verbal and visual rhetoric has always defined a set of attitudes characterised by extremes. And if the distance between the hideous pretensions of Guns and the bracing rigours of Reminiscences describes one of the most spectacular parabolas in ‘personal cinema’, the first installment of his Diaries, Notes & Sketches fits quite snugly in the gap between these almost antithetical landmarks. On the one hand, one encounters an ungainly scrapbook of self-pity, sentimentality, false naivety, sententiousness and self-romanticising martyrdom, epitomised by many of the stances adopted in the first two reels, along with some of the grandiloquent phrases and gestures which crop up later (e.g., the title, “REJECTED BY THE FLAHERTY SEMINAR WE SLEEP OUTSIDE IN THE COLD NIGHT OF VERMONT”, followed by this remark on the soundtrack: “While the guests proper, the respectable documentarists and cinéastes slept in their warm beds, we watched the morning with the cold of night still in our bones, our flesh. It was a Flaherty morning”). Yet at the same time, this varied chronicle also offers not only a detailed, affecting and valuable social history of a period and milieu, but an explicit reflection of the development of American avant-garde cinema over the same years through Mekas’ own growth as a film-maker, from the arty attitudes of the early reels to the ‘abstract expressionist’, Brakhage-influenced methods of the later ones.

The verbal style bridging this transformation bears further witness to Mekas’ encounter with America, and the consequences of his engagement with a native romantic tradition — from Whitman and Wolfe (evidenced by the title Lost Lost Lost and such lines as, “O, sing, Ulysses, sing your travels” and “Those were long, lonely evenings, long, lonely nights”) through Sandburg and Dos Passos (“the blood of my city, the heartbeat” , “I was there, with my camera, I recorded it”) to Kerouac and Ginsberg (the assorted, self-satisfied ‘haikus’ in the fifth reel, followed by an explicit reference to Howl outside the walls of an asylum: “No, those were not the best minds of my generation, there, behind those windows, no”). Admittedly, in an autobiographical record that includes even fragments of a written diary and countless other highly personal references, one is often compelled to witness rather than judge, despite the obvious ‘atmospheric’ interventions of added sound effects and music at different times, which transfer certain memories to a more fictional and ‘impersonal’ domain.

But considering the manner in which Mekas has been refining his tools over the years, the development is largely the transformation of a 16 mm. camera used as a glorified Brownie or Polaroid into a veritable ‘caméra-stylo‘ –tracing an overall process of growth that starts to bear fruit in the delirious investigation of Joe Jones’ ‘mechanical’ drums in the third reel, and eventually progresses towards the invigorating counterpoint and alternation of contrasting footage shot by Mekas and Ken Jacobs in two country outings in the sixth. Quite apart from this evolving stylistic interest — apparent in the editing as much as the shooting, and reflected in such technical additions as synch sound in some of the later sections — one can also observe an unfolding account of the early American underground through the events and faces alone, suggesting a local history which sharply contrasts with certain concurrent and subsequent developments in England: the pronounced political activism of Mekas and his cohorts and the corresponding avoidance of theory; the movement towards ‘poetics’ and away from ‘systemics’; the anarchic forays into pastoral settings and attitudes.

For a distanced reflection on much of this material, one has to look beyond the parameters of these reels to the more mature strategies of Reminiscences, where the voice has clearly found both its style and its subject. Here Mekas is more interested in letting the past speak for itself, without either the benefits or the distorting strictures of after-thoughts. 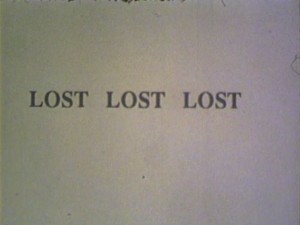