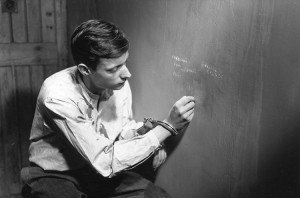 Based on a French lieutenant’s account of his 1942 escape from a gestapo fortress in Lyon, this stately yet uncommonly gripping 1956 feature is my choice as the greatest achievement of Robert Bresson, one of the cinema’s foremost artists. (It’s rivaled only by his more corrosive and metaphysical 1970 film Au Hasard Balthazar.) The best of all prison-escape movies, it reconstructs the very notion of freedom through offscreen sounds and defines salvation in terms of painstakingly patient and meticulous effort. Bresson himself spent part of the war in an internment camp and subsequently lived through the German occupation of France, experiences that inform his magisterial grasp of what the concentrated use of sound and image can reveal about souls in hiding. Essential viewing. In French with subtitles. 101 min. (JR) 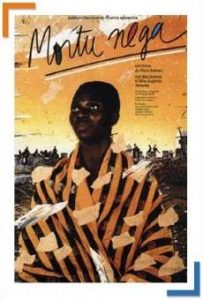 One of the best contemporary war films I know is this singular 1988 feature, the first by Guinea-Bissau filmmaker Flora Gomes (Po di sangui). The first half, as elemental and as unadorned as Samuel Fuller’s The Steel Helmet, concentrates on women fighting alongside guerrillas at the end of Guinea-Bissau’s war of independence in 1973, attacked by Portuguese helicopters as they travel on foot close to the border. The second half, more diffuse and at times more rhetorical, deals with the ambiguous conditions of the war’s aftermath. The title means “those whom death refused,” and true to that notion the heroine (Bia Gomes) has been fighting for about a decade. Gomes (no relation to the director) manages to convey the loss of her children in a wordless and underplayed moment that shook me to my core. Flora Gomes appears in a cameo as president of a postwar sector. 93 min. Film Center, Saturday, August 12, 4:00, and Thursday, August 17, 6:00. 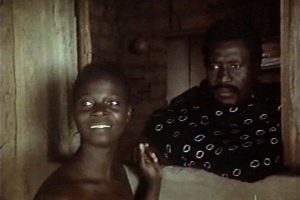 A little over two hours of recent videos by the great essayistic filmmaker Chris Marker (Sans soleil), ranging from playful personal works — such as Bestiary, put together between 1985 and 1993 and consisting of a record of the filmmaker’s cat’s responses to Ravel, the repeated staring of an owl, and two separate videos shot at a zoo — to documentaries for European television, including one that features Andrei Tarkovsky shooting the last sequence of his last film and then watching the film on video from his sickbed, a playful 1988 tour of Tokyo streets, a 1990 survey of reunified Berlin, a monologue by the painter Roberto Matta about his own work, and a fascinating account of a community of Bosnian refugees in Slovenia pirating TV signals to watch the news together. The videos about Tokyo, Berlin, and Tarkovsky aren’t subtitled, but they’re still highly watchable (and they contain bits of English, including actress Arielle Dombasle’s charming imitation of an American accent in the Tokyo work). The overall experience is roughly akin to channel surfing in a European hotel with a satellite dish. (JR)