From a 1989 catalog that I did for the Walker Art Center, Cinema Outsider: The Films of William Klein. — J.R.

William Klein on His Film Work

Klein made the following remarks in a telephone conversation with Jonathan Rosenbaum in early November 1988. 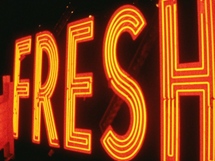 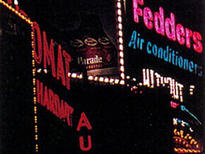 On Broadway by Light (1958) and Orson Welles

I did this book on New York: black-and-white, grungy photographs. People said, ‘What a put-down — New York is not like that. New York is a million things, and you just see the seamy side.” So I thought I would do a film showing how seamy New York was, but intellectually, by doing a thing on electric- light signs. How beautiful they are, and what an obsessive, brainwashing message they carry. And everybody is so thankful for this super spectacle. Anyway, I think it’s the first Pop film.

Afterwards, I went from New York to Paris on a boat. We were on the pier with all our suitcases when I saw Orson Welles with a cigar and a little attaché case – that’s all he had as luggage. I went up to him and said, “Listen, I’ve just shot a film. Would you like to see it?” I showed it to him in the boat’s movie theater, and he said, “This is the first film I’ve ever seen in which the color is absolutely necessary.” Read more