As much as I revere some of the Belgian films of Chantal Akerman, if I had to choose only one Belgian film to take with me to a desert island, I’d have a pretty rough time forsaking this 1971 masterpiece by André Delvaux, which I seriously, even spectacularly, underrated when I reviewed it for the Monthly Film Bulletin (in their April 1976 issue, vol. 43, no. 507) — although paradoxically I seemed pretty well attuned to its special enchantments even when I kept finding ways to undervalue them, perhaps because I couldn’t find adequate ways to account for them. Happily, I’ve been able to rediscover this film thanks to a sublime Belgian box set  that I reviewed some time ago in my DVD column for Cinema Scope.  — J.R. 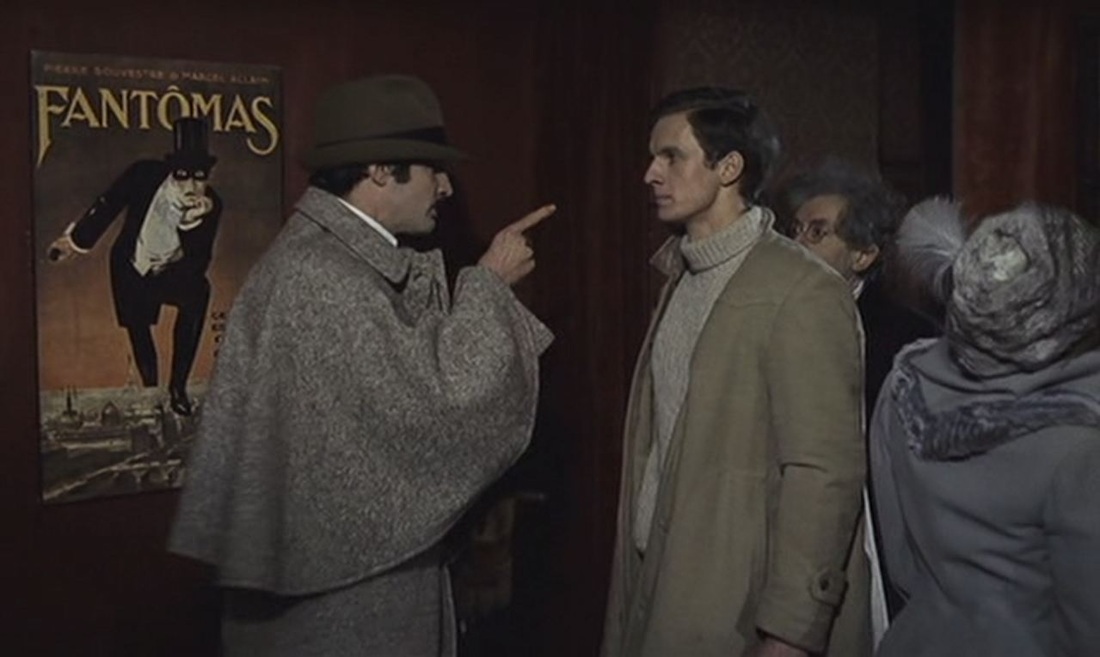 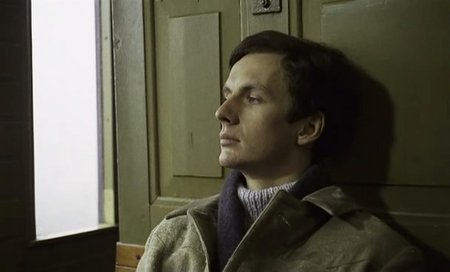 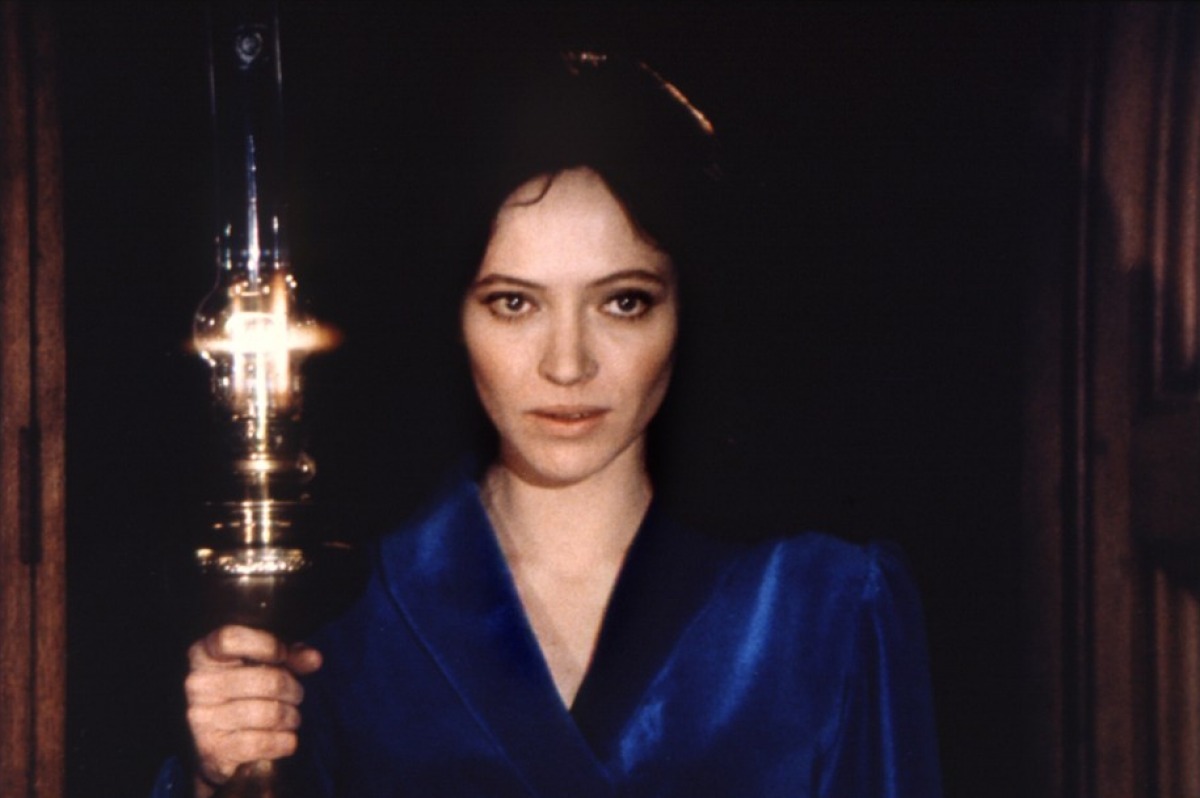 1917, Paris. Julien Eschenbach, a young pianist and musical journalist, receives a telegram from his composer friend Jacques Nueil – now fighting in the air force – inviting him to a rendezvous at the latter’s house, La Fougeraie, in Bray. On the train there, he explains to a soldier that he was rejected by the draft because of his Luxembourgian nationality, and recalls his friendship with Jacques and his girlfriend Odile. A mysterious woman greets him at the house, announces that Jacques hasn’t yet arrived, and serves him tea in the sitting room. On the piano, he finds an unfinished nocturne composed by Jacques and dedicated to himself, which he plays; when the lights flicker out, the woman brings in a candelabra and explains that they are only twelve kilometers from the front. After trying unsuccessfully to phone Paris, Julien recalls a quarrel with Jacques about concealing his job as a cinema pianist and a later piano recital arranged by Jacques at the home of the wealthy M. and Mme. Hausmann, during which the latter tried to seduce him. While the mysterious woman serves him dinner, he remembers Jacques announcing his enlistment after the outbreak of the war and asking Julien to take over his journalistic post; he also recalls a holiday near the Marne with Jacques and Odile the previous year. Back in the present, the woman leads him upstairs and they make love. In the morning there is still no sign of Jacques, and Julien walks to the train station, where several soldiers in uniform are waiting to leave. After reading in a newspaper that the air force has been grounded for three days due to bad weather, he lets the train for Paris leave without him, recalling a little girl’s song he first heard in Paris: “Le Paradis n’est pas pour toi, le Paradis est pour le Roi”. 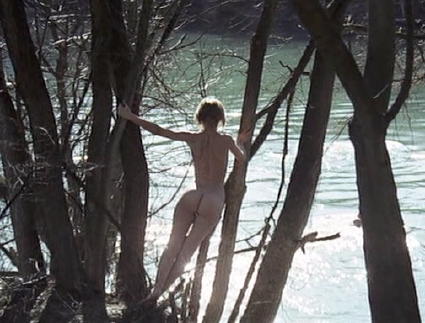 An appealing foray into ambiguity that uses ellipsis as a kind of erotic invitation, Rendezvous at Bray largely wins one over because its more modest ambitions are so gracefully realized. Derived from a short story by Julien Gracq -– a writer whose rather specialized terrain seems midway between the Gothic novel and Surrealism -– its boundaries are clearly marked by its cozy range of cultural references and its attractive period atmosphere, both of which allow for fireside reveries more nourishing to the imagination than to any prolonged analysis. This is not to say that the plot isn’t well worked out on its own terms: the story can be read without difficulty as a conventional moral tale both in and between its explanatory absences, with its hero’s professional “purity” and aloofness from commitments steadily undermined, or at least questioned, by the allure of the accoutrements of Jacques’ world –- Anna Karina, Bulle Ogier, and the comfortable furnishings of La Fougeraie implying, no less than the professional and military involvements, a stronger foothold in the world outside. Thus the literal absence of Jacques at the rendezvous, like his uncompleted nocturne dedicated to Julien, functions as a gentle rebuke to the hero’s incompleteness, and his virtually passive role in the action throughout defines him as an empty receptacle to be filled only by vestiges of his friend’s experience. But his remoteness from that experience — epitomized by the rattle of fragile objects in Jacques’ sitting room caused by the war a dozen kilometers away –- also tends to make him the least interesting fixture that the film has to offer, except as an object for the spectator’s identification. (In Gracq’s story, he serves as the nameless narrator; the surname that Delvaux gives him suggests a possible link with Aschenbach, the protagonist of Mann’s Death in Venice.) Consequently, the film’s principal pleasures mainly seem somewhat incidental: Odile’s wide-eyed delight in the adventures of Feuillade’s Fantômas and her gauche attempts to cut and eat a piece of chicken at the Hausmann soirée while standing up (both rendered by Bulle Ogier in her most charming semi-autistic manner); Jacques’ nocturne, composed by Frédéric Devreese as a Brahms pastiche; Anna Karina’s function and presence as an erotic wish fulfillment; painterly shots framing each of the women and various settings in a dreamy ambience recalling Delvaux’s namesake. If these and related seductions figure in the margins of a plot that finally seems almost as dull as dishwater, the latter none the less serves as a useful enough vehicle –- leading one into a nostalgic burrow of after-dinner daydreams, neatly bracketed within period irises, where various mysteries ultimately lead to an itinerary of minor enchantments rather than  the other way round.
JONATHAN ROSENBAUM 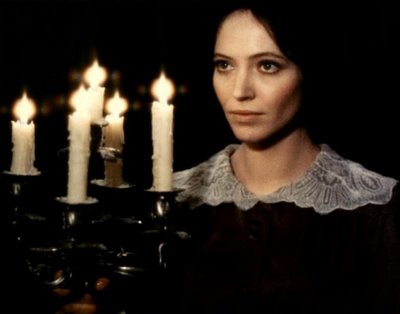