Genre specialist John Carpenter returns to the principle of confined space that he used as a disciplinary structure in Assault on Precinct 13 and The Thing in this horror thriller set in an abandoned church. The main difference here from earlier Carpenter films is the heavy metaphysical baggage: a team of graduate students and teachers (including Lisa Blount, Victor Wong, and Jameson Parker) in physics and science is summoned by a Catholic priest (Donald Pleasence) to study an ancient religious manuscript that proves to contain differential equations (long before such equations were developed), and a canister containing a green liquid that proves to be seven million years old. Mathematics combines with demonology to produce a variant on Night of the Living Dead, and while the church is playfully called Saint Godard’s, the pivotal use and significance of mirrors spawned by the canister liquid might make Saint Cocteau’s a more appropriate appellation. While the dense significations of the script (credited to one “Martin Quatermass”) may get a bit thick in spots, Carpenter’s handsome ‘Scope images generally make the most of them, and some haunting poetic notions — such as video images from the future that appear as recurring dreams dreamt by the church’s inhabitants — figure effectively in the plot. (Bolingbrook, Chestnut Station, Golf Glen, Grove, Orland Square, Plaza, River Oaks, United Artists, Woodfield, Ford City, Harlem-Cermak, Deerbrook, Evanston, Norridge, Hillside Square) 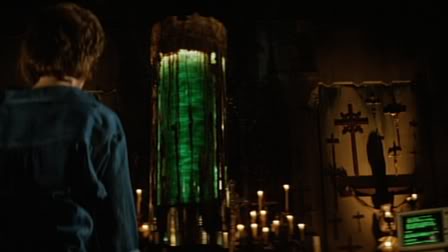