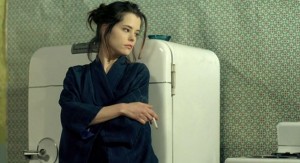 This 1995 film is the only feature by Hal Hartley that has the same degree of formal playfulness as his overlooked short films — perhaps because it was made as if it were three separate shorts, all recounting the same story but set in different cities (New York, Berlin, and Tokyo) and told mainly in different languages, with certain differences regarding gender, race, ethnicity, and milieu. Though it lacks some of the behavioral charms of Hartley’s Trust and The Unbelievable Truth and even announces its own likelihood to fail as an experiment in the second episode, this is in some ways my favorite Hartley picture — not only because it takes the most risks, but also because it gives the mind more to do in the process. The actors include Martin Donovan and Parker Posey in New York, Dwight Ewell, Geno Lechner, and Elina Lowensohn in Berlin, and Miho Nikaidoh, Kumiko Ishizuka, and Hartley himself in Tokyo. The whole thing unfolds in an economical 85 minutes. Music Box, Friday through Thursday, November 8 through 14.