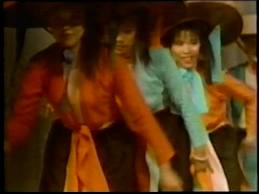 How many, already, have been condemned to premature deaths for having borrowed the master’s tools and thereby played into his hands? — Trinh T. Minh-ha Uncertainty is a difficult premise on which to build a documentary, although there are times when it may be the only honorable perspective. To be without certainty usually means to be without authority, and it is the position of authority that generally determines the form and address of the documentary as we know it.

As a rule, we depend on the solidity of an authority figure in order to feel unified and legitimized as spectators. No matter how many people may be behind the filming or taping of a news broadcast or documentary, and no matter how many people may be watching it, the pretense of some form of one-on-one communication between spectacle and spectator is nearly always maintained in order to facilitate the “transmission of information.” Whether it’s an anchorperson addressing the camera, a voice-of-God narrator providing offscreen commentary, or an interview subject addressing an interviewer who becomes our surrogate, the illusion is always fostered that information is traveling directly from an authority to an individual spectator, who is made to feel authoritative in turn because of the implied intimacy and directness of address. To interfere with this process is to upset the whole applecart; when the singularity, unity, and authority of the message and messenger are undermined, the spectator may feel similarly dispersed, divided, and uncertain.

Undermining documentary authority is a central aspect of all three of Trinh T. Minh-ha’s films to date — her short Reassemblage (1982), her feature Naked Spaces (1985), and now her second feature, Surname Viet Given Name Nam. Much of what is transgressive about all three films can be traced to this purpose. (In the new film, her method of carrying out this program depends in part on some delayed exposition, and readers who would prefer to approach the film innocently are advised to read no further.) In her first two films, both of which deal with West Africa, Trinh challenges and refutes the underlying principles of ethnographic films through camera work, editing, and the use of offscreen commentaries. The first two sentences uttered in Reassemblage go straight to the heart of the matter: “Scarcely 20 years were enough to make 2 billion people define themselves as underdeveloped. . . . I do not intend to speak about — just speak nearby.” Significantly, in the credits of Naked Spaces (a film that deals with West African architecture), Trinh both gives herself a director’s credit and places an X over the word “directed” — dislocating our usual sense of authority at the outset, and indirectly suggesting that redirection and indirection are equally descriptive of what she does.

In Surname Viet Given Name Nam – a film whose title already undermines conventional notions of unity and identity — Trinh’s principal target is the interview, which she manages to dismantle both as a form and as a concept. While the film uses many different kinds of material and texts, the major focus is on a series of apparent interviews with Vietnamese women. During the first part of the film, these “interviews” are conducted in English. The “interviewer” or “interviewers” remain offscreen throughout, and the women are apparently addressing these unseen presences.

In point of fact, almost none of the conventional anchoring devices used to stabilize the interview format is allowed to remain fixed in these sequences. The lighting often fluctuates between darkness and brightness, without any clear motivation; the camera periodically drifts away from the women’s faces, panning or sometimes just swaying back and forth or up and down to upset our sense of equilibrium. The women’s disorienting deliveries suggest at different times sincerity and insincerity, direct expression and what appears to be the recitation of a text that is not always fully understood.

The speakers often pronounce English words phonetically rather than accurately, and their heavy Vietnamese accents oblige us to make a concerted effort to understand them. Sometimes a portion of what they’re saying appears graphically on the screen, which assists our understanding; but occasionally this “visual aid” also derails us by furnishing a text at some variance with what we hear. At other times, the visual text becomes so prominent that we find we have to choose between reading and listening. (”Do you translate by eye or by ear?” one of the narrators asks at one point.)

These initial “interviews” explore the experiences and oppression of Vietnamese women in Vietnam–but as we eventually discover, the women recounting these experiences are not the same women who experienced and originally described them. Interviews originally conducted in Vietnam in Vietnamese and published in French in 1982 have been translated into English by Trinh. She then gave these texts to other Vietnamese women, refugees now living in California, to recite and perform.

Only later in the film, when some of these American refugees are themselves interviewed in a clearly American setting, do they speak in (subtitled) Vietnamese. A few elements producing instability persist in these interviews, such as fluctuations in lighting, but for the most part they register as conventional in form. Trinh encourages us to read them somewhat against the grain, however, in her offscreen introduction to this part of the film: “By choosing the most direct and spontaneous form of voicing and documenting, I find myself closer to fiction.”

Trinh recently explained to me that she deliberately gave herself less control over the interviews in the film’s second part, letting each woman choose what she wore and how she presented herself. (As a result, all of these women tend to come across as middle-class — although some are working-class — because this was how they wanted to be seen in an American context.) The central setting of this second part is a community of Vietnamese immigrants in San Jose; the events shown include a classroom discussion, a Miss Vietnam competition, and a wedding. It quickly becomes clear that cultural translation — the influence of American customs and attitudes — is as pertinent to the film as linguistic translation. To point up the playacting aspect of this cultural translation, Trinh lists each of these women in the final credits as an actress playing two roles — a woman in Vietnam and herself.

It’s not surprising that translation should be a major preoccupation of Trinh’s. A writer, composer, and teacher as well as a filmmaker, she immigrated to the United States in 1970; she composes classical Vietnamese music, writes in French as well as English, and teaches in San Francisco. (One of her books in French, Un art sans oeuvre, was published in this country in 1981; another, a collection of poetry called en minescules, was published in Paris in 1987; her latest book, in English, Woman/Native/Other, was just published this month by Indiana University Press.) The fact that her first two films are about West Africa, and the fact that all three of them are in English but have been influenced in certain ways by both French literature and literary theory, complicate still further the issue of cultural translation. 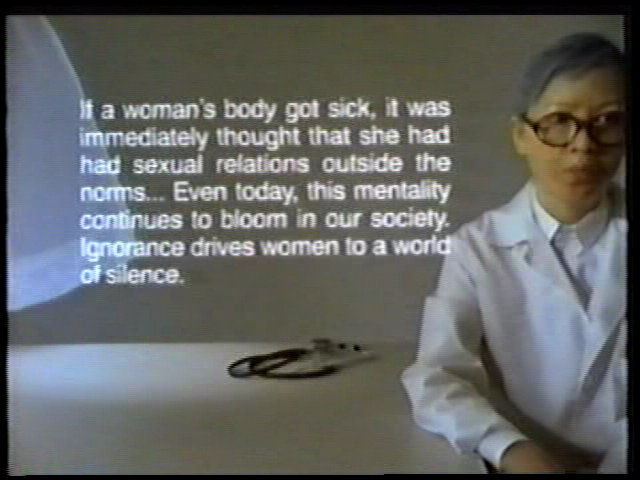 Trinh’s many activities and influences seem to be at play throughout the film, informing its rhythms and textures as well as its poetics and its sense of plural voices. The film opens with silent, slow-motion color footage of a row of Vietnamese women dancing, accompanied by sounds of moving water, then of an explosion. Finally, as the film’s title appears underwater and against a black background, we hear a thunderstorm; its sounds seem to combine the two previous sounds. As in Naked Spaces, the offscreen commentary is assigned to many different female voices with a variety of accents — South African and American as well as Vietnamese — and none of these is privileged over any of the others as a conveyor of the “truth” or assigned an ethnic identity: an American voice is just as likely to relate the experience of a Vietnamese woman as a Vietnamese one. What Trinh herself at one point describes as “the impossibility of a single truth in witnessing, remembering, recording, forgetting” informs the subject matter as well, which ranges from Vietnamese folklore to critical commentary to historical reflection to personal experience. The effect of using many voices is to cut these texts loose from their sources and allow them to circulate freely in the space of the film and the spectator’s imagination, along with the Vietnamese instrumental music and songs that are also heard.

A similar principle of plurality governs the variety of visual materials used: rubbing shoulders with each other are still photographs ranging from photojournalism to family snapshots, diverse kinds of archival and original footage, and various printed texts (including subtitles). Each of these materials is “sculpted” to fit the film’s contours and rhythms. Trinh often uses an optical printer to manipulate her material, she uses subtitles calculatedly and selectively, and she artfully composes all of the “interviews” in the first part of the film in relation to the camera.

If the overall effect of these visual and aural strategies is musical — to a greater degree than that produced by the comparable methods of multiplying and dispersing voices and texts in the films of Yvonne Rainer and the videotapes of Steve Fagin, for example — it is partially the spectator’s process of selection that creates the resulting melodies and harmonies. (Berenice Reynaud has written, “The purpose of the film . . . is not to ‘give voice’ to hitherto silent bodies, but rather to give them full value as musical instruments — acknowledging their own sound, their density, their fullness, their intrinsic beauty, even when the melody they resonate was written by somebody else.”)

Spectators who have found this film “unemotional” seem to be unconsciously rebelling against the abundance of emotional material about the subjugation of women that is offered. They may also be troubled by the fact that these emotions — most of them indescribably sad, a few of them offering signs of hope –aren’t assigned to a single voice or woman and aren’t authenticated by a single source of authority. Instead they’re distributed across the entire surface of the film, and each spectator is obliged to find her or his own place in relation to them. Each spectator, in other words, is asked to be as dispersed, as divided, and as “uncertain” as the film itself insists on being.

By the same token, Trinh’s refusal to make political hay of the distinctions between North and South Vietnam may also disturb some viewers. But it is a refusal motivated and justified by the film’s focus — the “marriage” of the Vietnamese woman to the state, whether it happens to be North Vietnam, South Vietnam, central Vietnam, or the United States. Any discussion of communism versus capitalism would tend to glide over or obscure that focus.

Late in the film, Trinh offers a poetic commentary that gives us a fresh notion of both the war in Vietnam and cinema: “War as a succession of special effects: the war became film before it was shot. Cinema has remained a vast machine of special effects. If the war is the continuation of politics by other means, then media images are the continuation of war by other means: immersed in the machinery, part of a special effect, no critical distance. Nothing separates the Vietnam war and the super-films that were made and continue to be made about it. It is said that if America lost the other [war], they have certainly won this one. . . . There is no winner in a war.”

Trinh proposes an alternative to this model of war as cinema and cinema as war. “The problem of translation, after all, is a problem of reading, and of identity.” Intermingling country, family, language, culture, and identity in its title as well as in its form and substance, Surname Viet Given Name Nam suggests that we may have to dismantle all of them before we can begin to put them back together again. 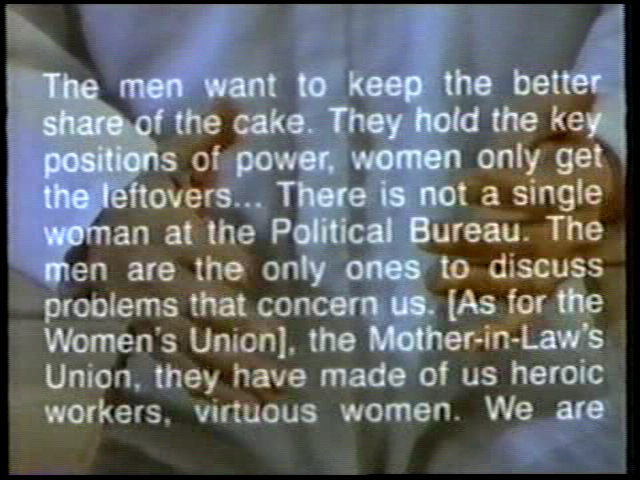