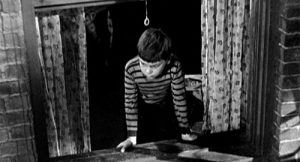 Adapted by Mel Dinelli from a Cornell Woolrich story, this is one of the most underrated B pictures of the 40s, perhaps because neither its director (Ted Tetzlaff) nor its stars (Bobby Driscoll, Barbara Hale, Arthur Kennedy, Ruth Roman, and Paul Stewart) are strong calling cards today. Driscoll won a special Oscar for his performance as a little boy known for telling fibs who witnesses a murder from a fire escape one night but can’t get anyone to believe him. This taut thriller (1949, 73 min) is almost as close to neorealism as to noir — the details of working-class city life are especially fine. (JR)