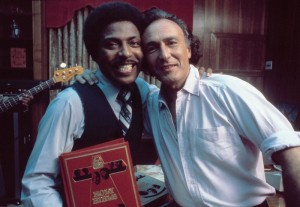 Made for West German television in 1980, William Klein’s very entertaining and energetic documentary portrait of the rock-and-roll idol was shot mainly in Macon, Georgia, Little Richard’s hometown, at a time when the singer was a media evangelist for a company selling expensive commemorative Bibles. Midway through production, Little Richard had a financial dispute with the Bible company and announced that he’d received a message from God telling him to walk out on the film. He promptly disappeared. Ordinarily, this would have left the film and filmmaker high and dry. But a deft use of archival footage of Little Richard in his prime, combined with Klein’s usual fascination with media fanfare — including a hilarious procession of black and white Little Richard impersonators — gives the film more than enough to sink its teeth into. And because this is William Klein, the teeth are sharp and the bite is sure. (JR)