The best scene from Orson Welles’s DON QUIXOTE & “The Most Beautiful Six Minutes in the History of Cinema”(2 Chicago Reader blog posts, 2007) 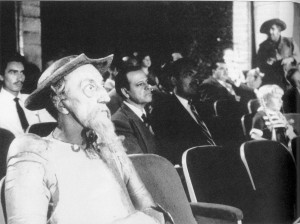 I hope I can be forgiven for promoting a piece of my own promotion. It seems worth doing in this case  because an hour-long interview with me by Mara Tapp about my latest book, Discovering Orson Welles, taped for CAN TV19 and showing on Sunday, October 21, at 5 PM and then again on Monday, October 22, at noon, entitled “Unseen Orson Welles,” includes a silent, five-minute sequence from Orson Welles’ unfinished Don Quixote that is arguably the greatest sequence he shot for the film, even though it can’t be found in the execrable version cobbled together by Jesus Franco in 1992. It was shot in the mid-1950s in Mexico City, during the postproduction of Touch of Evil.  It’s set in a movie theater, features child actress Patty McCormack as herself, Francesco Riguera (see photo) as Quixote, and Akim Tamiroff (perhaps Welles’s favorite character actor, who also appears in Mr. Arkadin, Touch of Evil, and The Trial) as Sancho Panza, and is fully edited by Welles.

“The Most Beautiful Six Minutes in the History of Cinema”

Thanks to Reader webmaster Whet Moser, here’s a scene from Welles’s Don Quixote, preceded by a few comments from me from an upcoming interview, “Unseen Orson Welles.” As I mention in the last chapter of my book, contrary to the claim of some Italian critics that this sequence is derived from the attack on several windmills in Part 1, Chapter 8 of the Cervantes novel, I think it can be traced more plausibly back to Quixote’s attack on a puppet theater in Part 2, Chapter 26 — although, as with other scenes in Welles’s film, it’s a very free adaptation. Meanwhile, the Australian film critic Adrian Martin has kindly sent me a short text (pasted below)  by the Italian philosopher Giorgio Agamben, a provocative reading of both this scene and the novel. (I’ve just recalled that the girl in the film is named Dulcie, supporting Agamben’s assumption about her identity.)“Unseen Orson Welles: a conversation with Jonathan Rosenbaum” airs on CANTV, Channel 19, on Sunday, October 21, at 5 PM and then again on Monday, October 22, at noon. The interviewer is Mara Tapp. Update: The  interview, including the sequence, is available here. 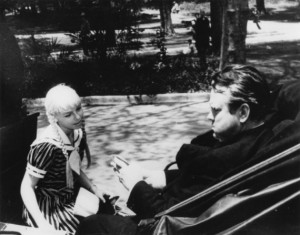 The Most Beautiful Six Minutes in the History of Cinema

Sancho Panza enters the cinema of a provincial town. He is looking for Don Quixote and finds him sitting apart, staring at the screen. The auditorium is almost full, the upper circle — a kind of gallery — is packed with screaming children. After a few futile attempts to reach Don Quixote, Sancho sits down in the stalls, next to a little girl (Dulcinea?) who offers him a lollipop. The show has begun, it is a costume movie, armed knights traverse the screen, suddenly a woman appears who is in danger. Don Quixote jumps up, draws his sword out of the scabbard, makes a spring at the screen and his blows begin to tear the fabric. The woman and the knights can still be seen, but the black rupture, made by Don Quixote’s sword, is getting wider, it inexorably destroys the images. In the end there is nothing left of the screen, one can only see the wooden structure it was attached to. The audience is leaving the hall in disgust, but the children in the upper circle do not stop screaming encouragements at Don Quixote. Only the little girl in the stalls looks at him reprovingly.

What shall we do with our fantasies? Love them, believe them — to the point where we have to deface, to destroy them (that is perhaps the meaning of the films of Orson Welles). But when they prove in the end to be empty and unfulfilled, when they show the void from which they were made, then it is time to pay the price for their truth, to understand that Dulcinea — whom we saved — cannot love us. 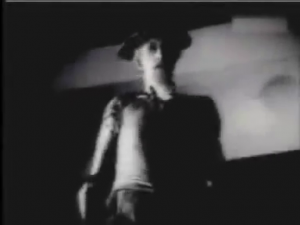