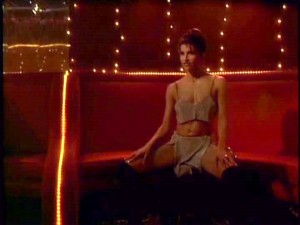 Director Paul Verhoeven and writer Joe Eszterhas’s fresh meat market—a sleazy Las Vegas porn show with clunky production numbers that resemble body-building exercises, backed by heaps of big studio money. The story, a low-rent version of All About Eve, charts the rise of one bimbo showgirl (Elizabeth Berkley) at the expense of another (Gina Gershon); alas, the only actor who seems comfortable is Kyle MacLachlan. It must be admitted that, as with Basic Instinct and Starship Troopers, which I also underrated initially, this 1995 movie has only improved with age—or maybe it’s just that viewers like me are only now catching up with the ideological ramifications of the cartoonlike characters. In this case, the degree to which Las Vegas (and by implication Hollywood) is viewed as the ultimate capitalist machine is an essential part of the poisonous package. With Glenn Plummer, Robert Davi, Alan Rachins, and Gina Ravera. R, 131 min. (JR) 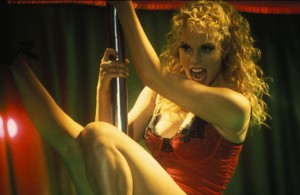