The Bed You Sleep In 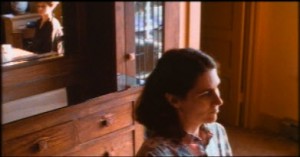 This 1993 feature certainly has its flaws — including a wholly unnecessary literary quotation that appears on-screen at the worst possible moment — but it’s still one of maverick independent Jon Jost’s most forceful efforts to date, in part because it stars the most talented actor he’s ever worked with, the resourceful Tom Blair. Mainly known as a stage actor and director, Blair also starred in two of Jost’s best earlier features — as a wandering, jobless malcontent in Last Chants for a Slow Dance (1977) and as a misguided, bullying real estate speculator in Sure Fire (1990). Here he rounds out a loose trilogy of Jost’s corrosive, speculative self-portraits by playing a more sympathetic and ostensibly less alienated character, the owner of a lumber mill employing 60 workers, though the consequences of his situation prove to be even bleaker — and this time they can’t be so confidently traced back to his own character. A tragic, beautiful, and mysterious film that alternates between all-American landscapes (many of them composed as diptychs) and an unraveling nuclear family, this is as evocative and apocalyptic as Jost’s cinema gets — a film full of unanswered questions that will nag at you for days even as it makes fully understandable the sort of feelings about this country that drove Jost into European exile not long after it was completed. Read more