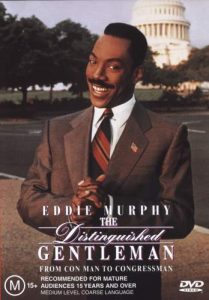 Query: How do you make a satire about contemporary corruption in the U.S. Congress, much of it based on real-life abuses, with a former speechwriter for Walter Mondale (executive producer Marty Kaplan) as cowriter, and somehow ensure that it never intersects with reality? Answer: Cast Eddie Murphy in the lead. Murphy plays a con artist who scams his way into the Senate, then (you guessed it) belatedly develops a conscience; the filmmakers treat all the characters, not to mention the audience, as sitcom puppets. Jonathan Lynn (My Cousin Vinny) directed, and the costars are Lane Smith, Sheryl Lee Ralph, Joe Don Baker, Victoria Rowell, Grant Shaud, Kevin McCarthy, and Charles Dutton (1992). (JR)