Review of THE LOST WORLD OF DEMILLE 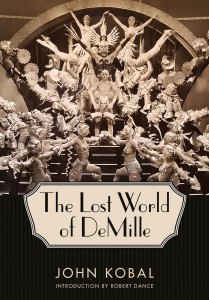 The Lost World of DeMille 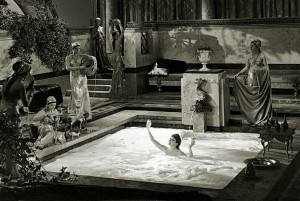 Filmmakers and spectators both suffer substantially from the sort of critical typecasting fostered by the marketplace and its reliance on advertising shorthand. I once heard Terry Gilliam complain that he was surrounded by people trying to come up with “typical Gilliam touches” when those were just the sort of things he wanted to avoid. And even when I was in grammar school, Cecil B. De Mille, another large-scale director, was one of the few movie auteurs along with Disney, Ford, and Hitchcock whose artistic identity I could readily recognize, even though, as Luc Moullet points out in his 2012 book about DeMille, L’Empereur du mauve (literally, “The Emperor of Purple”), the overblown contrivances and vulgarities of DeMille’s pictures, combined with their popularity, virtually excluded him from art and serious criticism as far as the U.S. was concerned. The DeMille profile that I recognized in the Eisenhower era was basically that of a Republican patriarch who delivered epic adventures and Biblical spectaculars, an impression broadened only slightly by his 1952 circus blockbuster The Greatest Show on Earth. It didn’t factor in any of his earlier hyperbolic melodramas and sophisticated comedies and the diverse overlapping identities that came with these, which Americans preferred to forget about. One might even speak about a DeMille Touch found in virtually all the genres he took up, epitomized by an early intertitle in his 1919 Male and Female — “Why shouldn’t the Bath Room express as much Art and Beauty as the Drawing Room?” (a quotation mangled somewhat in Kobal’s biography) — and exemplified by such splendors as the milk bath in The Sign of the Cross (1932) and perhaps even the languorous body language of Charles Laughton’s Nero in the same film. Moreover, the unusually frank depictions of class tensions and the technical innovations of such remarkable features as The Whispering Chorus (1918) and Dynamite (1929) tend to be overlooked today; more often, if they’re considered at all, they’re subsumed under the camp appeal of such pictures as Madam Satan (1930) and Samson and Delilah (1952)–another, cagier kind of critical neglect. 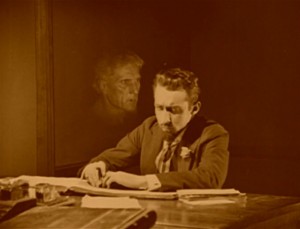 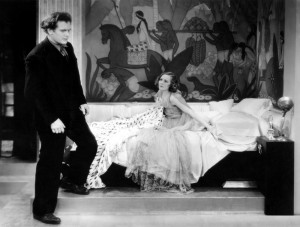 The plot contrivances of all these movies are certainly outlandish, but no more so than those of, say, Christian Petzold’s Phoenix, which we usually agree to overlook because of the uncommon truths that they yield. And it might be argued that what we automatically call “sophisticated” about Lubitsch and “vulgar” about DeMille partially stem from class positions that we’re likely to misread as ideological and/or aesthetic positions without class inflections — in much the same way that Samuel Fuller and Jerry Lewis are sometimes misread because of their working-class origins. I hasten to add that DeMille’s family background was anything but working-class. But his grasp of working-class taste was every bit as acute as Lubitsch’s perception of upper-class taste. The bottom line for both men was their feeling for shared public fantasies relating to class.

While living in London in the mid-1970s, I knew John Kobal (1940-1991) as an amiable Canadian with a huge stills collection — another form of type-casting that excluded the facts that he was born in Austria and would eventually write an 1100-page, two-volume DeMille biography commissioned by and virtually completed for (but never published by) Knopf shortly before he died from AIDS. After Kobal’s sister Monika retrieved the manuscript, the University of Mississippi agreed to publish the book if it was substantially cut and edited, a job carried out by Graham Coster in London, and this is the version that we now have—still a hefty package given its over 400 large-format pages. In a better universe, we’d also have access to the fuller version in digital form or at least an account of what sort of material was cut. In his Introduction, Robert Dance notes that Kobal “was the first scholar to have unfettered access to DeMille’s house…where his papers, collections, and memorabilia” were essentially as DeMille left them when he died in 1959,” which suggests that there might still be data in the original manuscript that remains unavailable elsewhere. (The De Mille property — which included the former Chaplin mansion, converted into De Mille’s office space — figures as a virtual character in this biography, dominating the first chapter.) But Kobal never completed his end notes or compiled a bibliography, limiting the book’s scholarly value — although there is at least a sketchy index.

Like Peter Bogdanovich and Kevin Brownlow and unlike Moullet, Kobal qualifies more as a fan and a nonacademic historian than as a critic, but he still has a critical intelligence that he can put to good use. Furthermore, like Bogdanovich and Brownlow, his principal tool of research is the interview; perhaps Kobal’s most valuable previous book is his 1985 collection People Will Talk. And he’s sensitive to some of DeMille’s neglected virtues, such as his handling of class issues and his technical innovations.

There’s plenty more here to hold and sustain one’s interest: DeMille’s complicated relationship to stage impresario David Belasco (as major influence, former employer, and role model); his thematic preoccupation with reincarnation (the focus of an early and successful play that he wrote and which Belasco took the credit for, and the basis for DeMille’s ambitious, post-Intolerance 1925 oddity, The Road to Yesterday);  his older brother William, a successful playwright and credible (if less commercially successful) film director whose illegitimate son Richard was raised by Cecil as his own son to avoid a family scandal; Cecil’s fruitful and extended creative and romantic partnership with screenwriter Jeanie MacPherson (1886-1946), a former actress for D.W. Griffith and one-time film director whose highly productive relationship to DeMille suggests a parallel to the relationship between Hou Hsiao-hsien and novelist Chu T’ien-wen. But when it comes to grappling with DeMille’s multiple paradoxes — such as the fact that his most memorable films (including The Whispering Chorus, The Road to Yesterday, Dynamite, and Madame Satan) tend to be ones he made away from Paramount, his long-term home base, or the erotic charge carried by his religious hypocrisies — Moullet is the better commentator. Moullet even posits Eisenstein as an influence on  Cleopatra — to which one should add that the showdown climax of the neofascist This Day and Age (1934) and the mock trial that follows it visibly and audibly derive from the equivalent sequence in Lang’s M, which understandably led to a plagiarism suit. Regarding Eisenstein, it’s worth noting that for all his Cold War anticommunism, DeMille had been an enthusiastic supporter of the Russian Revolution who traveled to the U.S.S.R. in 1931. (The possibility that DeMille influenced Eisenstein is also worth considering.) 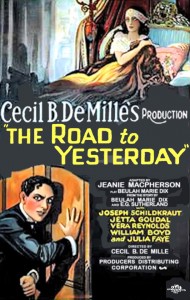 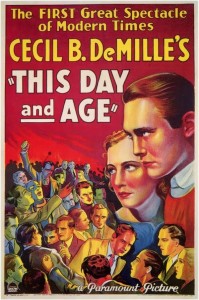 This brings us back to the issue of typecasting, which perpetually deprives us of the more nuanced and multifaceted Cecil B. De Mille that we still ought to have. Even calling him a neofascist in This Day and Age, however apt, generally entails overlooking the anomalous fact that the all-male student lynch mob in that film that threatens to drop the gangster villain (Charles Bickford) into a lair of hungry rats is a multiracial lynch mob whose black members are shown respectfully as equals to the white majority. What do we make of that?

Kobal’s approach to DeMille’s life and career is far too anecdotal and casual to allow for him tackling such knotty issues. I’d like to regard it as a valuable resource and a temporary way station before a truly critical biography in English finally comes along—assuming, that is, that one ever does. –-Jonathan Rosenbaum