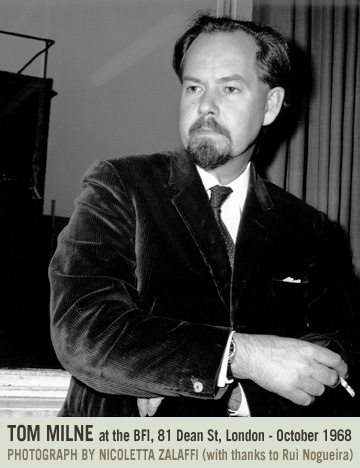 Film history has always been at the mercy of technology and markets, yielding the brutal shifts from silent to sound pictures and from black and white to colour, as well as the reconfigurations of films on television. More recently, digital video and the Internet have ushered in a confusing transitional period that we’re still in the middle of, recasting our canons of films and film critics alike according to what’s available.

Improbably, most of Carl Dreyer’s major films —- which until recently were almost impossible to see anywhere in decent prints —- are now available in pristine form to anyone on the planet with a multiregional DVD player. Yet those of James Whale that don’t qualify as horror, including such 30s masterpieces as Remember Last Night?, Show Boat, and The Great Garrick, remain firmly out of reach. And the warm, mischievous, shy yet gruff, and dedicated critic who introduced me to all this and much else — Tom Milne, who died in Aberdeen last December — is barely known today because little of his prose has made it onto the Internet.

For those with backlogs of Monthly Film Bulletin and Sight and Sound from the 60s through the 80s, it’s hard to think of other London-based film writers during that stretch who wrote more cogently and passionately about film. He also translated Godard’s and Rivette’s film criticism and Bernard Eisenschitz’s Nicholas Ray biography, subtitled 391 French features, and edited The Encyclopedia of Horror Movies and the first three editions of the Time Out Movie Guide. Despite the modest way he carried out this meticulous work, these still remain his better-known achievements.

For his own precise, poetic prose, you have to chase down his books on Dreyer, Rouben Mamoulian, and Joseph Losey, and his still woefully uncollected reviews and articles (including theatre criticism in the late 50s and early 60s —- notably for Encore, where he also served as an editor), which continued until his retirement and return to Aberdeen in 1993. A staff writer on Sight and Sound for eight years, working as Penelope Houston’s assistant, he also edited the Monthly Film Bulletin for a spell. He may have been the one who did the most in English to explicate and celebrate the French New Wave and its antecedents while finding plenty of time to defend and expound upon his other enthusiasms, which were admirably and broadly pluralistic.

I regarded him as one of my best friends in London during the two and a half years I lived there, but it’s embarrassing to admit that I barely knew him at all. Yet given how private and reclusive he tended to be, aside from meals and screenings, this was the experience of everyone else I know who considered him a friend. Even David Meeker, who shared his musty, book-laden flat at Cornwall Mansions on Cremorne Road in World’s End for over a decade (1964-75), admits that ‘we never really became what I would call “personal” friends’.

As David’s successor for the next year and a half, it was no different for me. But Tom was inexhaustibly generous when it came to work-related matters —- checking my faulty translation of André Bazin’s Orson Welles line by line and correcting all the errors while stubbornly refusing any sort of payment for his work —- and happy to discuss films and books endlessly.

I’m delighted that an extract from his Dreyer book turned up as liner notes on Masters of Cinema’s DVD of Michael —- and that Nick Wrigley, its producer, has posted a collection of tributes to Tom at www.mastersofcinema.com, and was instrumental in getting him a multiregional DVD player last year.