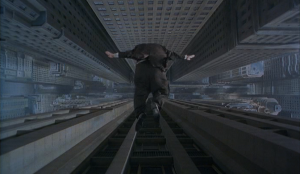 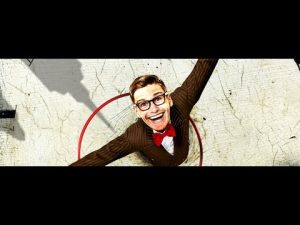 The year is supposed to be 1958, but because the filmmakers are Fargo’s Joel and Ethan Coen — the Beavis and Butt-head of starstruck independents, who clearly consider themselves better than history — what we get are various elements swiped from other movies made between 1929 and 1994, the year this was released. These massive borrowings, many from the screwball comedies of Frank Capra, Preston Sturges, Billy Wilder, and Terry Gilliam (plus a giant clock from Raoul Walsh’s The Horn Blows at Midnight), are mixed together with fancy sets to yield a jeering, dreamlike comedy with nothing much on its mind except how neat the Coen brothers are and how stupid or contemptible everybody else is, including everyone in the audience. This is a fantasy about the invention and mass marketing of the hula hoop as seen through the absurdist rise to executive power of a midwestern hayseed (Tim Robbins) gulled by both a cynical vice president (Paul Newman) and a cynical reporter (Jennifer Jason Leigh). At its best it’s a free-form fantasy with glitzy, well-executed effects and assorted metaphysical conceits but little feeling for any of the characters apart from derision (with a few touches of racism here and there). Sam Raimi collaborated on the script, and the supporting cast includes Charles Durning, John Mahoney, Jim True, and Peter Gallagher. True is especially adept in fulfilling the Coens’ manic cartoon game plan, and in a matter of seconds Gallagher offers just about the only persuasive satire of 50s iconography in the entire movie. 111 min. (JR)