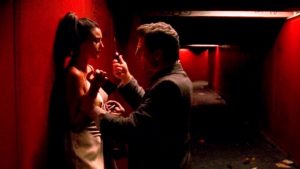 Gaspar Noé’s 2002 follow-up to his remarkable I Stand Alone is stupid, vicious, and pretentious, though you may find it worth checking out if you want to experiment with your own nervous system. As in the overrated and similarly misanthropic Memento, the episodes of the story play out in achronological order, from violent murder in a gay S-M club called the Rectum toward the rape and beating that motivated it and beyond that to earlier and happy times for the heroine (Monica Bellucci) and two of her lovers (Vincent Cassel and Albert Dupontel). The dialogue is mainly improvised, the sequences are mainly ten-minute takes (either real or simulated), and the aggressive 360-degree camera movements at the beginning are so disorienting that one can barely follow the action — though Noé grinds to a respectful halt to contemplate the rape and brutality. In French with subtitles. 99 min.