For my money, this is funnier than both Naked Guns combined, even down to the final joke-strewn credits. Putatively a parody of Top Gun, it also includes send-ups of Dances With Wolves, Full Metal Jacket, The Fabulous Baker Boys, Superman, and even Gone With the Wind. Directed and cowritten (with Pat Proft) by Jim Abrahams, one of the three writer-directors who launched Airplane!, this shares more with that 1980 laugh getter than an exclamation point and Lloyd Bridges; there’s also much of the same pleasure in milking cliches and ridiculing poker-faced straight men with their own compliance (Charlie Sheen is every bit as well cast here as Leslie Nielsen is in the Naked Gun movies), and the airborne antics are realized with a lovely sense of craft. With Cary Elwes, a very sexy Valeria Golino, Kevin Dunn, Jon Cryer, William O’Leary, Kristy Swanson, and Efrem Zimbalist Jr. (Webster Place, Ford City, Bricktown Square, Burnham Plaza, Golf Mill, Lincoln Village, Water Tower) 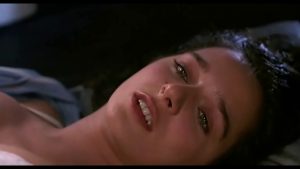