A failure, but an endlessly fascinating one. Between making his only SF film (The Damned) and his first successful art movie (The Servant), blacklisted expatriate Joseph Losey directed this 1962 film, adapted by Hugo Butler and Evan Jones from a James Hadley Chase novel, about a washed-up Welsh novelist of working-class origins (Stanley Baker) who unsuccessfully pursues a high-class hooker (Jeanne Moreau) while effectively driving his wife (Virna Lisi) to suicide. The film is pretentious and plainly derivative; I’ve always regarded as unwarranted and philistine Pauline Kael’s ridicule of Antonioni, Resnais, and Fellini in an article of the period called “The Come-Dressed-as-the-Sick-Soul-of-Europe Parties”, but she might well have included Losey’s film, with its clear debt to all three. It’s a painful testament of sorts (Losey himself can be glimpsed in a bar during a pan that also introduces the hero, showing his personal stake in the proceedings from the outset), though it makes wonderful use of locations in Venice and Rome and features an excellent jazz score by Michel Legrand (with a pivotal use of three Billie Holiday cuts). A decadent period piece and a sadomasochistic view of sexual relations, this singular, resonant, and at times even inspiring mannerist mess is far more interesting than a good many modest successes. (Losey can’t be blamed entirely for the film’s disjointedness either; its producers mucked around with it, ultimately reducing it from 155 to 100 minutes. Labeling this rare 120-minute version with two kinds of Scandinavian subtitles — the longest surviving edition since the 60s — the director’s cut, as various publicists and reviewers have been irresponsibly doing, only adds insult to injury.) (JR) 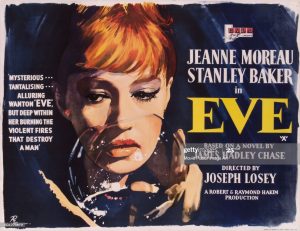