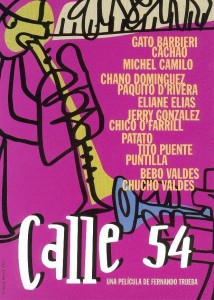 This no-nonsense documentary (2000) by the Spanish director Fernando Trueba (an Oscar winner for Belle Epoque) is a welcome primer on Latin jazz, an expansive genre that can range from a Dizzy Gillespie big-band arrangement to a Charlie Haden ballad. If my eyes aren’t deceiving me, the minimal exterior footage of musicians, shot in the U.S., Cuba, Puerto Rico, and Sweden, is digital video while the much slicker footage in simple studio settings is on celluloid — an appropriate combination, even if there’s a bit too much restless MTV-like cutting and angle changing. Much more importantly, Trueba’s commentaries are brief and to the point, and are never delivered over the music. A celebration of visual as well as aural delights, the film amply demonstrates how playing certain percussive instruments — conga drums, vibes, even piano — is much like dancing (though Trueba also provides actual dancing to go with Chano Dominguez’s jazz-flamenco fusions near the beginning and some Afro-Cuban drumming near the end). Apart from the percussiveness, the music is extremely varied, running the gamut from Eliane Elias’s lyrical piano to Gato Barbieri’s gruff but tender tenor sax to Chico O’Farrill’s wonderful big-band scoring; among the many other featured players are Paquito d’Rivera, Jerry Gonzalez and the Fort Apache Band, Tito Puente, Chucho Valdes, and a couple of the latter’s relatives. I wasn’t bored for an instant. In English and subtitled French and Spanish. 105 min. (JR) 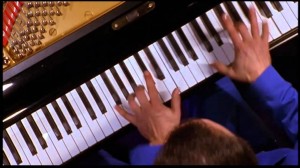