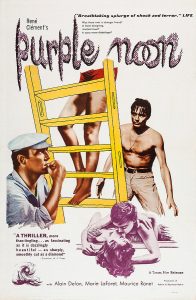 A very elegant and watchable 1960 French thriller starring Alain Delon in his prime, this film was adapted from Patricia Highsmith’s novel The Talented Mr. Ripley by director Rene Clement and screenwriter Paul Gegauff, best known as Claude Chabrol’s key script collaborator in the 60s and 70s. The Hitchcockian theme — transference of personality — is given almost as much mileage here as in Hitchcock’s own Highsmith adaptation, Strangers on a Train, as Delon decides to take over the identity of a spoiled, wealthy playboy he’s been hired to bring home to his father. Henri Decae’s color cinematography is dazzling, and the Italian and Mediterranean locations are sumptuous. With Marie Laforet, Maurice Ronet, and PlayTime‘s Bill Kearns. 118 min. (JR)