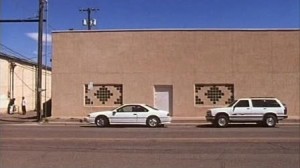 The ninth feature of experimental filmmaker James Benning (11 x 14, One Way Boogie Woogie, Landscape Suicide, Deseret) is one of his most ambitious and powerful. Four Corners takes as its jumping-off point the famous tourist spot where New Mexico, Arizona, Colorado, and Utah meet, but as a complex meditation on landscape, history, and painting, its subject is really the entire country (one of the longest passages deals with Milwaukee, where Benning grew up). The film examines four paintings by very dissimilar artists (Monet, Jasper Johns, a black man from Alabama, and a first-century Native American); presents biographical sketches of each painter; explores migration history, ethnic displacement, and conflicts in particular areas of Milwaukee or Four Corners; includes 13 fixed (and beautifully composed) shots of each area; and records two pieces of ethnic music (by a Navajo band and a prerap Harlem group). But Benning convinces us that nearly all these things are part of the same story, a politically potent one that brims with a sense of everyday life. (JR) 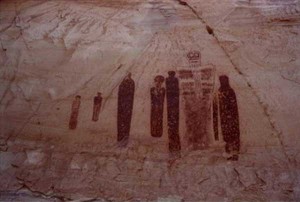