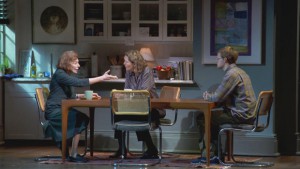 Shortly before Christmas, I flew from Chicago to New York in order to witness Elaine May on Broadway as she powerfully and persuasively played the lead role in a two-act Kenneth Lonergen play, The Waverly Gallery, about her character’s encroaching senility and memory loss. It’s as if May, now pushing 87, asked herself, “What terrifies me more than anything else?” and then decided to enact, embody, and exorcise that terrifying condition eight times a week, playing a compulsive talker who is gradually losing both her mind and her ability to communicate with her daughter, her son-in-law, her grandson, and the only new painter in her Greenwich Village gallery, all of whom eventually give up on her even when they start to share some of her irrationality and incoherence. 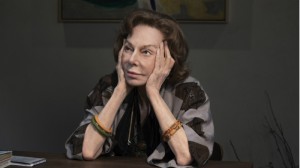 Although I usually process May’s genius more in terms of cinema than in terms of theater, perceiving the grim darkness of her performance here in relation to the tragic finality of her feature Mikey and Nicky, this also makes an intriguing bookend with An Evening with Mike Nichols and Elaine May, which ran on Broadway 58 years ago under Arthur Penn’s direction and featured a certain amount of improvisation. Even though May doesn’t seem to improvise many (if any) lines here, her part still seems open to that existential possibility at every moment, implicating the audience in her ongoing struggle. 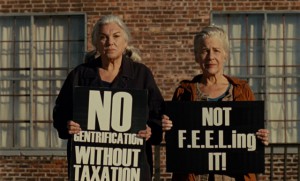 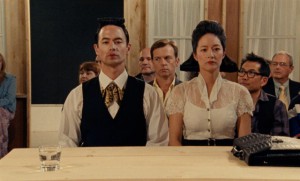 Shortly after Christmas, back in Chicago, I caught up with a two-part, four-hour masterpiece, Patrick Wang’s A Bread Factory — too late to include it in any of my end-of-year lists, where it clearly deserves to belong — thanks to a link on my laptop, provided by a friend. The film hasn’t opened in Chicago, and given the uncertainties of Wang’s self-distribution, I can’t guess when or even if it will play here. No less generational and performative than A Waverly Gallery, it charts the diverse activities and struggles — rehearsals, programs, and many diverse backstage machinations — of an imaginary arts center in upstate New York run by an elderly lesbian couple and threatened by a chic competitor (a straight, young, pseudo-Chinese couple with Hollywood/corporate backing and conceptual pretensions, applying for the same city grant). The mise en scène is lively and unpredictable, and so is the intriguing mix of acting styles, but Part 2 broadens the canvas considerably by introducing characters who sing or tap-dance rather than speak, interrupting the spoken dialogue. Because the uneasy lives of the artists in the town are shown along with their work, the complex interactions often suggest an Americanized version of Rivette, inflected by as much generational tension as what we see charging through the equally divided spaces of The Waverly Gallery. It’s another potent cocktail of mixed messages, somehow combining this age and this season’s apocalyptic despair about the state of the world with improbable doses of life, humor, and hope. 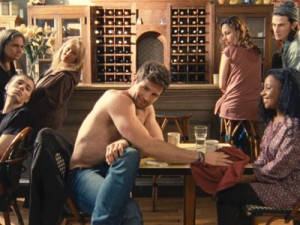