As a lark, Daniel Riccuito sent friends and colleagues his angry screed on Joe Biden. Jonathan Rosenbaum brought him up short with a surprisingly reasoned, and typically eloquent. response.

DR: Please name the most recent Democratic nominee for president who was even more repellant than Joe Biden. I’m speaking wholistically, taking into account Biden’s political record, his rhetoric, his documented public groping of women and girls – all of it. I’ll start by answering that nobody comes to mind. And, without immediately avoiding a direct answer by uttering “BUT… Donald J. Trump!”, please confront the facts as they pertain to Biden himself. On an objective basis, he is the most anti-Choice nominee since Roe became law (Gore is a close second, though his progressive shift was sharp and consistent, not so Mr. Biden’s). The infamous Crime Bill flowed directly from the successful launch of mass incarceration which Biden, moving to Reagan’s political right, started in the 1980s. Ok, I’ll stop loading up the question and ask again: Who the fuck (in recent decades) was worse than this schmuck? I lied. A few more words: Bill Clinton is my idea of the worst US President in history on the basis of NAFTA alone, which fundamentally altered capitalism and made unions largely irrelevant – not to mention whatever broken shards of representative democracy were extant pre-NAFTA.… Read more »

Looking Back in Anger [STAR SPANGLED TO DEATH]

Dear Jonathan,
I first came upon writing on STAR SPANGLED TO DEATH a week ago.  Sorry.
Appreciate what you had to say except, naturally, for your take on my Muslim comment.  So I must’ve failed to make clear my despising of all religions with their bloody track records.  I go so far as to consider the to-do about Nazis overblown: a momentary political organization that, employing Ford up-to-date industrial methods, accomplished the actual near-fulfillment/”final solution” to 2 000 years of strenuous Christian degradation, torture and outright slaughter of Jews.  “Race” had just been invented maybe a century earlier but murdering Jews was an enduring Christian project.  (Nor were Nazis killing any other “race”.)  A fact to remember about WW2: Christians murdered Jews.  A land war coupled to a religious “war” and the war they were allowed to win by USA as long as they could keep costing the Soviets.  Don’t get me started….
I’m remembering one line in the film about “a bedtime story gone amok”.  That is my take on these force-fed beliefs given helpless children wired up to believe, needing to believe if they’re to survive (“no, you can’t run into traffic”).
… Read more » 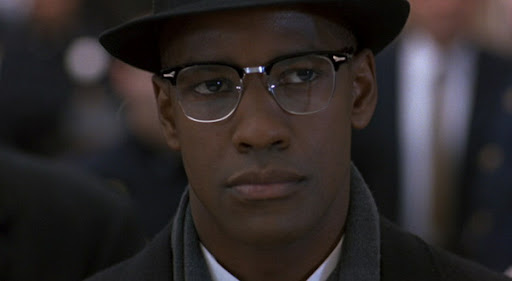 “At the top of 1968, over the vehement protests of my family and my friends, I flew to Hollywood to write the screenplay for The Autobiography of Malcolm X. My family and my friends were entirely right; but I was not (since I survived it) entirely wrong. Still, I think that I would rather be horsewhipped, or incarcerated in the forthright bedlam of Bellevue, than repeat the adventure — not, luckily, that I will ever be allowed to repeat it: it is not an adventure which one permits a friend, or brother, to attempt to survive twice. It was a gamble which I knew I might lose, and which I lost — a very bad day at the races: but I learned something.” — James Baldwin, The Devil Finds Work (1976)

“If the complexity that was Malcolm X survives this moment as only a T-shirt or a trademark, then it is no wonder that Clarence Thomas has emerged as the perfect cooptive successor–an heir-transparent, a product with real producers; the new improved apparition of Malcolm, the cleaned-up version of what he could have been with a good strong grandfather figure to set him right.… Read more »