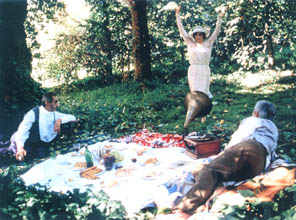 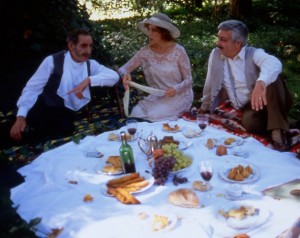 Pushing 100, Portuguese writer-director Manoel de Oliveira is our oldest living film master, which makes it all the more astonishing that he’s averaged one feature a year since the ’80s. His finest work is bound to literature and theater, and this eccentric triptych (1998) is one of its absolute peaks. It consists of a one-act play (Prista Monteiro’s The Immortals) and a story by Antonio Patricio about four people who attend it, one of whom recounts the third story, Agustina Bessa-Luis’s The Mother of the River. The theme of this exquisite masterpiece, linking all three parts, is existential identity, played out in each case by two characters — father and son, playboy and prostitute, young village woman and ancient witch. The witch is played by Irene Papas, and de Oliveira can be seen dancing with his wife in the middle episode. In Portuguese with subtitles. 114 min. (JR) 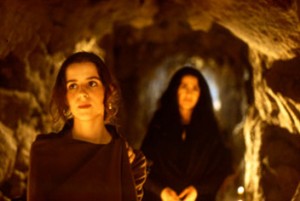