Pier Paolo Pasolini’s last feature (1975) is a shockingly literal and historically questionable transposition of the Marquis de Sade’s 120 Days of Sodom to the last days of Italian fascism. Most of the film consists of long shots of torture, though some viewers have been more upset by the bibliography that appears in the credits. Roland Barthes noted that in spite of all its objectionable elements (he pointed out that any film that renders Sade real and fascism unreal is doubly wrong), this film should be defended because it refuses to allow us to redeem ourselves. It’s certainly the film in which Pasolini’s protest against the modern world finds its most extreme and anguished expression. Very hard to take, but in its own way an essential work. In Italian with subtitles. 117 min. (JR) 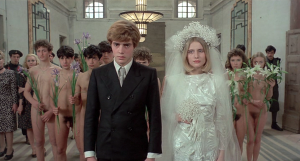