Rotterdam ’89: Magic from Rivette and Ivens

From Sight and Sound (Spring 1989). The on-screen breakdown of Jean-Pierre Léaud in Out 1, alluded to below, was lamentably removed by Rivette shortly after its Rotterdam screening — attended, if memory serves, by no more than five or six people. — J.R. 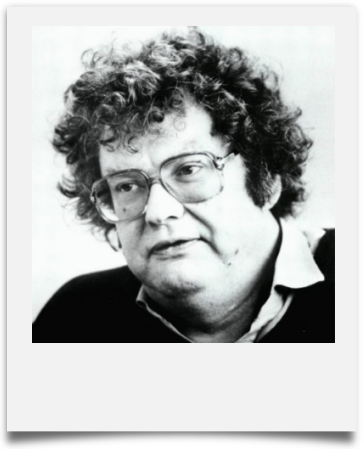 When he died last July, Hubert Bals had already selected twenty films for his eighteenth Rotterdam Festival, and embarked on retrospectives devoted to John Cassavetes and Jacques Rivette. Rather than try to second-guess his preferences for the rest of the programme, interim director Ann Head and her able staff invited several filmmakers associated with Bals to complete the selection with neglected titles of their own or other choices. This quick galvanizing of energies resulted in the best of the six consecutive Rotterdam festivals I’ve attended. The event was haunted by recent losses – Cassavetes and Jacques Ledoux, as well as Bals – but the legacies they left behind were vibrantly present on the screen.

Raul Ruiz brought two engaging new featurettes, Tous les nuages sont des horloges ( a free adaptation of a Japanese mystery coscripted by his students) and L’Autel de l’amitié (a series of Diderotesque dialogues about the French Revolution), both bristling with visual invention. A lush and aggressive 27-minute videotape by Godard, Puissance de la parole [see below], concentrates on a lovers’ quarrel conducted by phone from opposite sides of the globe. Carlos Reichenbach’s Film Demencia, which I was only able to sample, seemed an exhilarating, cockeyed retelling of the Faust legend in contemporary Sao Paolo. One tribute to Bals consisted of shorts – including a structural exercise from Peter Greenaway, segments by Ioselliani and Passer, and a conversation between Kieslowski and Agnieszka Holland filmed by the latter. 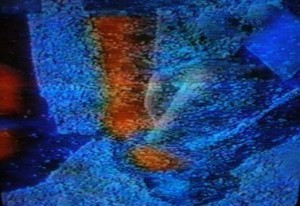 But for me the supreme Bals legacies were his own selections that opened and (virtually) closed the festival, Joris Ivens and Marceline Loridan’s A Story of the Wind and Rivette’s legendary Out 1 (1971) — both mind-bending masterworks in the grand tradition, each one epochal in a very different way. If Out 1: Noli me Tangere offers a backward glance to two intersecting culminations — the collective ideals of the 60s and the theories of André Bazin, both tested here well past the breaking point — Ivens and Loridan’s poetic documentary-fantasy seems to have been made (as Tian Zhuangzhuang said of his The Horse Thief) for the twenty-first century.

The inclusion of Rivette’s latest feature, La Bande des quatre, in the Berlin competition precluded its appearance in Rotterdam, but two other Rivette premieres more than made up for its absence: the original 3-hour L’Amour par terre (1984), an hour longer than the release version, and Out 1, whose only previous public screening (in 1971) was in workprint form. (The film remained unprocessed until the French government recently subsidised a print — a cherished project of Jacques Ledoux as well as Bals — and the reels were rushed to the festival straight from the lab.)

For most viewers, alas, the length of such films automatically places them ‘outside competition,’ and it was no surprise to find them sparsely attended. But Rivette surely needs his extended structures, and both films demonstrate beyond any doubt that the more extended they are, the more lucid their intentions become. At two hours, L’Amour par terre seemed mainly a rehash of Rivettean intrigues about theatre, and I feared an additional hour would only mean more of the same. But in fact most of the hour focuses on the sexual relationships of the two heroines (Geraldine Chaplin and Jane Birkin), and the film falls into place as a classically balanced story about friendship and betrayal, with theatre now serving a much more marginal role. While it still can’t be regarded as major Rivette, it can no longer be deemed a failure like Hurlevent. 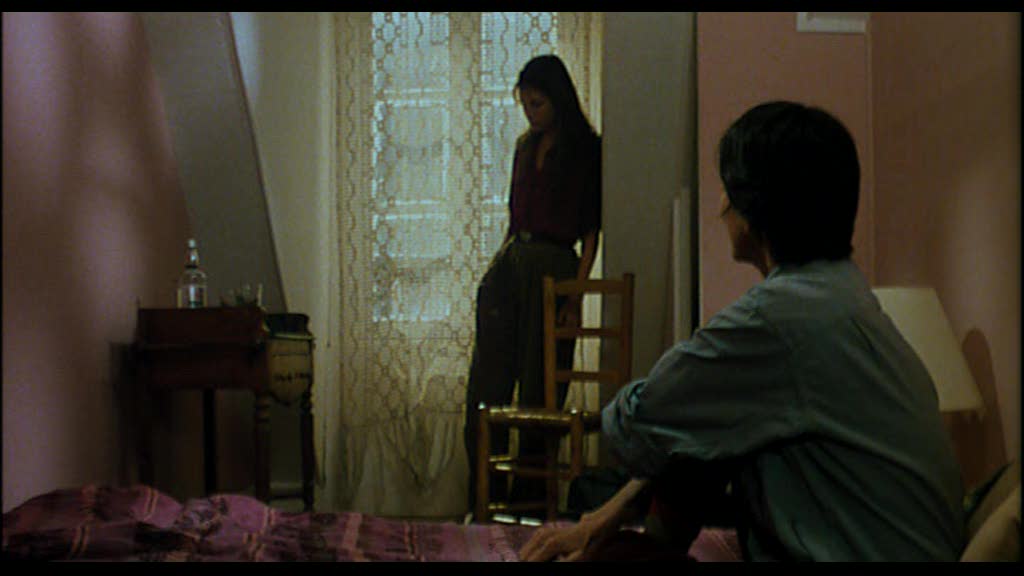 By contrast, both versions of Out 1, which grew out of 30 hours of improvisation with over three dozen actors, have an integrity and legitimacy of their own — the serial of eight episodes made for (but rejected by) French TV, and the four-hour Spectre derived from this serial a year later. Although both films tell roughly the same story, the serial is much lighter and airier, with very little of the anguished and fractured paranoid texture of Spectre. While the latter is constructed as an infernal and insoluble puzzle, the former mainly unfolds like a comic pseudo-documentary with the density of a nineteenth-century novel. 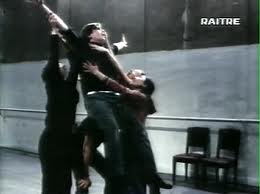 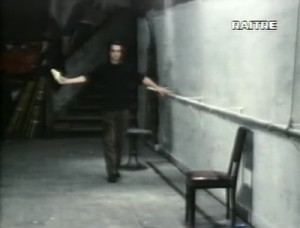 Both films chart the gradual merging of four plots centred round two experimental theatre groups and two isolated individuals (Juliet Berto and Jean-Pierre Léaud), but the meanings generated are far from identical. Broadly speaking, the Bazinian long-take Noli me Tangere is the Rossellini or Rouch version of the story; the anti-Bazinian, aggressively edited and splintered Spectre is the Lang version. One of the most striking differences in the long version is that Michel Lonsdale, the director of one of the theatre groups, emerges as the central character — not only because of his role in guiding his group’s improvisations and psychic self-explorations, but also because his ambiguous role as a rather infantile patriarch becomes pivotal to the overall movement of the plot. 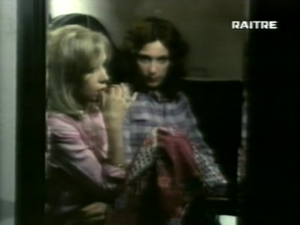 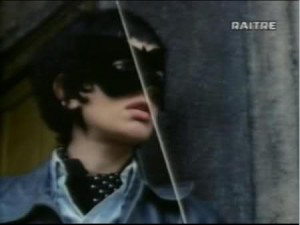 The gradual disintegration of collectivity which the film charts reaches its hair-raising climax in the final 90-minute episode, when each of the four major characters (Bulle Ogier, Léaud, Berto, and Lonsdale) goes to pieces in a separate extended sequence. Lonsdale’s scene is placed last, and his reduction to a mass of blubbering jelly on a beach seems to bring the film full circle from the wordless hysteria of his group’s first exercise. 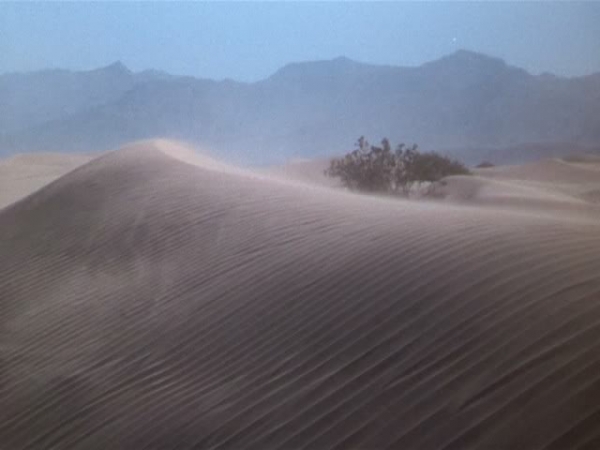 A Story of the Wind, a one-of-its-kind autobiographical effort, features 90-year-old Joris Ivens as its protagonist and focuses on his ambition to film the wind — a subject that winds up involving his own asthma, the history of China (where most of the film is set), the Third World in general, the history of cinema and a good deal more. The film’s nearest siblings are Sans Soleil, The Horse Thief, Brightness and Testament d’Orphée (although, as Simon Field points out, it is the Orpheus myth co-authored by Eurydice: Loridan apparently wrote most of the script). 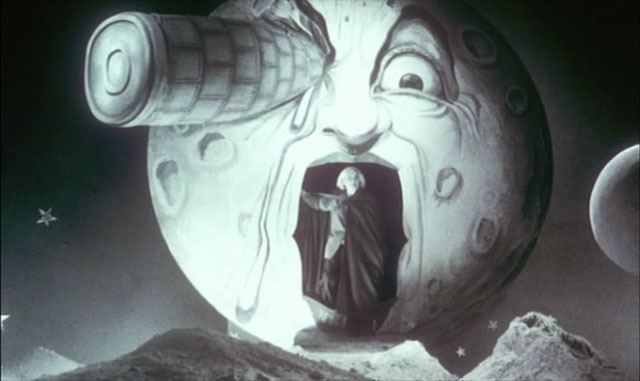 Everything from the windmills in Ivens’ native Holland to the woodwinds in Michel Portal’s eclectic score becomes part of the poetic texture, and when Ivens appears in a studio recreation of Trip to the Moon, one realises in a flash that he is a virtual contemporary of the Méliès film. 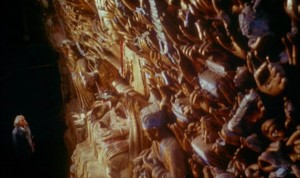 Elemental in more ways than one, the film reaches its climax in the Chinese desert, where two electric fans are installed to coax the wind out of hiding for a waiting film crew . Summing up both his life and the present century, Ivens remarks, ‘I believe in magic — it’s not just science that works wonders.’ His credo proved a fitting motto for Rotterdam ’89, where magic was alive and well. 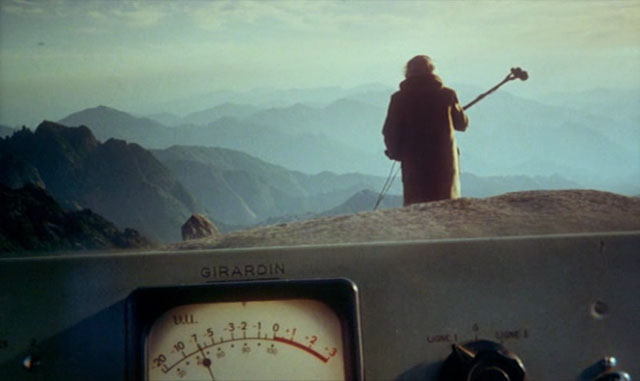