I would nominate this authoritative 1962 adaptation of Ed McBain’s novel The King’s Ransom as Akira Kurosawa’s best nonperiod picture, though Ikiru and Rhapsody in August are tough competitors. It’s a 142-minute ‘Scope thriller in black and white, except for one partly colorized shot, about a kidnapping that goes awry: a chauffeur’s son is accidentally spirited away instead of the son of the businessman the chauffeur works for. The title refers to the topographical layout of the action as well as class divisions, and Kurosawa’s script and masterful mise en scene do a lot with both. Scorsese has been talking for years about doing a remake of this, but it’s hard to believe he could equal it. With Toshiro Mifune. In Japanese with subtitles. (JR) 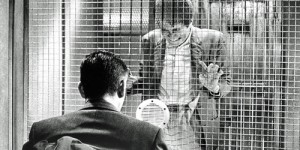