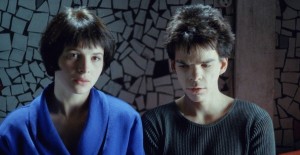 One festival brochure describes this 1986 feature as a “dazzling film noir thriller,” yet the distinctive talents of French director Leos Carax have relatively little to do with storytelling. The vaguely paranoid plot concerns a couple of thieves (Michel Piccoli, Hans Meyer) hiring the son (Denis Lavant) of a recently deceased partner to help them steal a cure to an AIDS-like virus, but the noir and SF trappings are so feeble that they function at best as a framing device, a means for Carax to tighten his canvas. The real meat of this movie is his total absorption in the wonderful leads, Lavant and Juliette Binoche, which comes to fruition during the former’s lengthy attempt to seduce the latter, an extended nocturnal encounter that the various genre elements serve only to hold in place. The true source of Carax’s style is neither Truffaut nor Godard but the silent cinema, with its melancholy, its innocence, its poetics of close-up, gesture, and the mysteries of personality. Bad Blood uses color with a sense of discovery similar to that found in the morbidly beautiful black and white of Carax’s Boy Meets Girl, and its naked emotion and romantic feeling are comparably intense. Critics tend to link Carax with the much older Jean-Jacques Beineix (Diva) and the much callower Luc Besson (Subway), but as Carax points out, Bad Blood is “a film which loves the cinema, but which doesn’t love the cinema of today.” From the standpoint of a Beineix or a Besson, Bad Blood might seem jerry-built and self-indulgent; from a cinematic standpoint, it blows them both out of the water. 119 min. A 35-millimeter print will be shown. Gene Siskel Film Center, Art Institute, Columbus Drive at Jackson, Chicago, Friday, September 15, 6:00; Saturday, September 16, 8:00; and Sunday, September 17, 5:00; 312-443-3737.