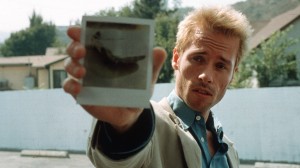 With its classically seedy southern California setting, this second feature by Christopher Nolan is more memorable than his first, Following (1998). Nonetheless, it exemplifies what the English mean when they call something too clever by half. It’s a fascinating and gripping but also rather heartless and mean-spirited tale, much of it told backward, about an insurance investigator (Guy Pearce) with short-term amnesia trying to avenge the rape and murder of his wife. Severely hampered by his periodically forgetting everything that’s happened since this tragedy, he tries to compensate by shooting Polaroids and tattooing his body with various reminders and instructions. More a puzzle than a meaningful story, it reminds me of how Edmund Wilson compared reading a mystery to eagerly unpacking a box of excelsior, only to find a few rusty nails at the bottom. With Carrie-Anne Moss, Joe Pantoliano, and Stephen Tobolowsky. R, 113 min. (JR) 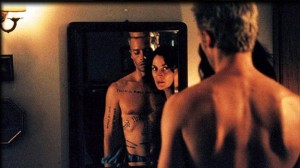