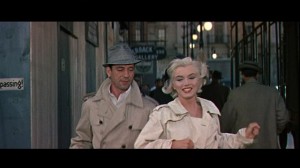 Although this 1960 movie is usually accorded a low place in the Marilyn Monroe canon — understandably so, because the comedy and musical numbers never quite take off the way they’re supposed to, and the central plot premise is more than a little labored — it deserves to be reevaluated for the intelligence of Monroe’s performance and the rare independence of her character; this one was made after her brush with Actors Studio, and she isn’t playing a bimbo. Yves Montand costars as a reclusive billionaire who discovers he’s being parodied in an off-Broadway revue; he tries out for the part himself, incognito, and she’s the chorus girl who helps him along. George Cukor directed, in ‘Scope, and lent a certain glamour and polish to the proceedings. With Tony Randall, Wilfrid Hyde-White, Frankie Vaughan (whose number, “Incurably Romantic,” isn’t half-bad), and bits by Milton Berle, Bing Crosby, and Gene Kelly; Norman Krasna wrote the querulous script. 118 min. (JR)