Truth is Stronger Than Fiction (THE FINAL INSULT)

Even though the following review for the Chicago Reader, originally published on March 27, 1998, is fairly mixed, it seems worth reviving as a reminder of how neglected significant portions of Charles Burnett’s work continue to be. I certainly wouldn’t mind seeing The Final Insult again and reconsidering it. (James Naremore gives it a thoughtful treatment in his excellent recent book on Burnett.)

With Ayuko Babu and Charles Bracy.

Given the difficulties he had in the 70s and 80s getting his films made and seen, Charles Burnett [see photo at end of article] seemed in danger of becoming the Carl Dreyer of the black independent cinema—the consummate master who makes a film a decade, known only to a small band of film lovers. Seven years passed between Killer of Sheep (1977) and My Brother’s Wedding (1984), and then another six before To Sleep With Anger (1990), which tried and failed to make a dent in the mainstream, as did The Glass Shield (1994).

But Burnett’s output has gradually accelerated, and in the mid-90s he produced two near miracles. When It Rains (1995), a 12-minute masterpiece financed by European TV, remains as hard to see as his two first features, but Nightjohn (1996), a wonderful feature made for the Disney Channel, is being revived at Columbia College’s so-called African Film Festival (which actually includes films by both Africans and black Americans) this Sunday at a free screening. And two more Burnett works have already surfaced in 1998: The Wedding, a big-budget, two-part miniseries that garnered high ratings when it was shown on ABC on February 22 and 23, and The Final Insult (1997), a very low-budget, European-financed work in digital video, only 55 minutes long, that’s playing three times this weekend, twice at Xoinx Tea Room on Friday and once at the African Film Festival on Saturday. (This doubling of venues appears to be accidental rather than planned, indicating how haphazardly most of Burnett’s works are distributed.)

As I remarked of Nightjohn a couple of years ago, Burnett’s mainstream successes have only increased his anonymity in the mainstream. None of the TV Guide listings for that film or The Wedding carried his name, nor was either film scripted by him. In fact The Wedding—an Oprah Winfrey project for which Burnett was brought on as a hired gun—can’t truthfully be considered a Burnett film at all. It functions fairly well as an interracial soap opera with a high-gloss setting (Martha’s Vineyard in the 50s) and at least one first-rate performance (Shirley Knight as the black heroine’s grandmother), but it doesn’t register with the precision or personal stamp that Burnett brought to Nightjohn; the elaborate machinery of the miniseries genre, unwieldy flashbacks and all, seems to have overwhelmed him. Even one of the more interesting aspects of the story—the way the grandmother judges her various relatives on the basis of skin tone, and how these various discriminations became confused with questions of class—appears to be serviced more than inflected by Burnett’s participation. It’s honorable work on its own limited terms, but not something that deserves to be ranked alongside any of Burnett’s shorts or features; the overriding glamour engulfs whatever the film has to say—and whatever Burnett might have hoped to say through it.

None of these objections can be lodged against The Final Insult, a video about the homeless in Los Angeles that mixes elements of fiction and documentary in a manner that appears to be wholly of Burnett’s choosing. But the mixture, more experimental than anything he’s done to date, is not a happy one. The Final Insult is a work of genuine rage and despair, but it periodically loses itself in meaningless details and eventually opts for a grim fictional resolution that can only cut off an audience’s contact with the subject. The film demonstrates what The Glass Shield already hinted at: that Burnett can turn out a characteristic, personal, and totally committed narrative that fails on its own terms. Yet the failure itself is instructive.

Not long ago I experienced a rude awakening while trying to reread one of the touchstones of my youth, James Agee’s highly experimental and defiantly idiosyncratic nonfiction book about Alabama sharecroppers, Let Us Now Praise Famous Men (1941), which is accompanied by some of Walker Evans’s most powerful photographs. The problem wasn’t Agee’s sincerity but his bludgeoning virtue, which winds up deflecting attention from his outsize subject—stricken families and the lives they lead—toward the heroism of his own efforts. The relentless seesawing ultimately defeats the project. The two most meaningful theatrical experiences I’ve had both dealt with the dispossessed—junkies in the Living Theater’s production of Jack Gelber’s The Connection and the homeless in John Cassavetes’s production of his own play, A Woman of Mystery, with Gena Rowlands and Carol Kane. Both productions had brilliant strategies for guiding the audience through the intermissions. In The Connection one of the “junkies” followed the customers into the lobby and begged for handouts; in A Woman of Mystery truly homeless entertainers appeared onstage during the various breaks. In both cases the line between playacting and real dispossession never really disappeared, but I was forced to deal with the limitations of my imagination and the imagination of the actors, no matter how good they were; they sent me back to the world with precise instructions about how little I knew.

In these terms The Final Insult fudges the assignment. Yet the video opens powerfully. The lead actor is Ayuko Babu, who as narrator and central character of When It Rains supplied much of that film’s robust poetry and lilting rhythm. After we see Babu driving on the freeway and singing a blues song, Burnett cuts to panning and tracking documentary shots of homeless people on the street, a pitiless extended catalog, while Babu intones the following, recited like poetry:

If a whale beaches itself, the world cries out–
Everyone will do whatever it takes to get it swimming in the sea again.
When I was washed up, everyone looked the other way–
You can still hear the laughter.
Part of my fall was my fault.
I should have seen it coming, but who is able to see the invisible?
The conspiracies formed years ago:
Budget cuts, backlash at O.J. Simpson’s trial.
When O.J. was found not guilty, my landlord raised my rent;
The Internal Revenue Services claimed I cheated on my income taxes five years ago
And owe $150,000 in penalties and back taxes.
The state claimed I owe $50,000.
How can a sharecropper’s son make enough to break even and get out of the hole the government has buried me in?
It was my fault for taking part in my own downfall.
I shouldn’t have abandoned the tools my mama gave me. Maybe I will inherit the earth after the revolution.

Then, after the camera focuses on Babu in close-up:

My name is Box Brown.

My mama named me after the famous slave Box Brown

Who before the Civil War escaped slavery

By shipping himself in a box to the north.

Life was simpler then. I haven’t lived up to the name.

During this stretch at least, the text is worthy of Dos Passos, meshing beautifully with the music and the images of real homeless people; the full effect is as rich as anything I got from the Living Theater or Cassavetes. Whether one takes Box Brown’s litany of woes as one man’s story or a cacophony of many voices doesn’t even matter. And as the video moves on to lengthier sequences in which two can collectors empty their wares at a recycling facility, a car stalls on a Hollywood street, and Box Brown buys lottery tickets and looks at skin magazines, I can still negotiate the mix of fiction and nonfiction as part of my route into the subject. As Cassavetes proved, homelessness can be characterized as a lack of definition— a chronic inability to define oneself and the surrounding world—and denying the spectator a sense of definition can be defended on those grounds.

Then comes an even lengthier sequence that I can’t confidently label as either fiction or nonfiction: a homeless man with a shopping cart starts singing in Korean to a trio of young Korean women chatting on a street corner, who laugh in recognition. It looked real, but the fact that they all seemed completely unaware of the camera made me suspicious, and when the homeless man turned up later, singing in other languages, I finally decided that he was a plant. And because the style shifts throughout, the levels of verisimilitude fluctuate as well. Many of the scenes are obviously blends of fiction and actuality (like the scene in which Box Brown gets entertained in a park by a couple of rappers), but the degree of artifice is seldom stable.

Much of the time Burnett is content to give a voice to the homeless, to allow them to speak for him: one street person—a veteran who complains to the camera about cuts in welfare benefits—alludes to the film and its title, concluding, “If I was to vote for the next president, I might as well vote for Jerry Lewis. At least he can laugh at the situation.” A woman sitting on a bench informs us, “I’m not as unfortunate as some people, because I have epilepsy and I get a check,” then explains that she collects her mail at the home of her sister, whom she despises. Another woman, wearing a Betty Boop T-shirt, asks in despair where her home and pills and life are, and keeps repeating, “They’re not gonna give it to us.” All this is as confrontational as The Connection and A Woman of Mystery, since we’re obliged to face the fact that most of us with homes react to homeless people on the street as if they were actors; our occasional uncertainty about which of Burnett’s characters are real resembles some of our everyday experiences. But Box Brown, with or without his eloquence, plainly isn’t real. The more we see of him, the less we believe in him, and when he proceeds to take over the narrative, we may feel—at least I did—that it doesn’t properly belong to him. When a man with a cart in search of money beats him up, we know we aren’t witnessing a real event and may wonder why this is being staged: To show us what really happens to some people? To impress us with the credibility of the staging, even though it isn’t real? We may wonder whether giving voice to street people and to actors playing street people can be considered in the same terms —the Living Theater and Cassavetes were both scrupulous about keeping them separate. We may even wonder if both the actors and the street people are diminished by the process.

I’m not sure how Burnett arrived at this impasse, but I suspect he followed a route comparable to Agee’s —compiling all his material (factual, rhetorical, lyrical) like items in a notebook and then pulling out and juxtaposing random pages. Agee didn’t resort to fiction in the same way, of course, apart from giving fictional names to his sharecroppers. But hoping to lose himself in the material, he threw more and more of his emphasis on his methods rather than on his ostensible subject, losing me in the process. I couldn’t accuse Burnett of bludgeoning me with virtue, because he doesn’t wear his sweat on his sleeve as Agee does. But his lack of confidence in sticking with a consistent mode of representation points to the same kind of distance and frustration, the same sensation of pounding on a door that remains nailed shut. 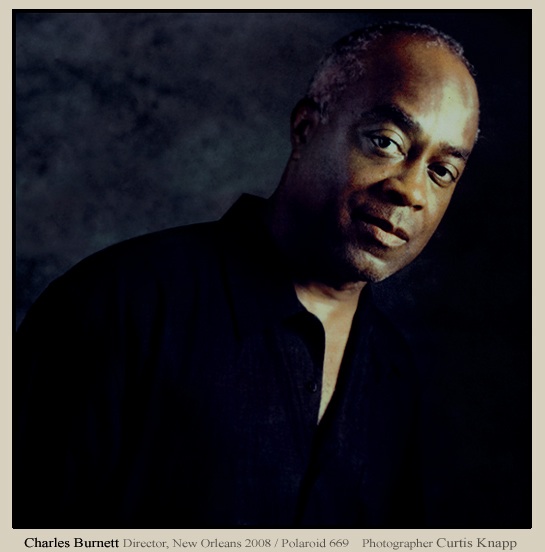