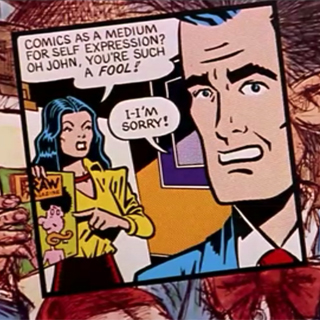 A very enjoyable documentary survey of American comic books, from their inception in 1933 to the present, by Canadian filmmaker Ron Mann (Imagine the Sound, Poetry in Motion). Newspaper comic strips such as Little Nemo in Slumberland, Krazy Kat, Dick Tracy, Li’l Abner, and Peanuts are omitted, but within the comic-book field, Mann’s reach is fairly broad, extending from diverse superheroes such as Superman and the Fantastic Four to EC Comics to underground artists such as Robert Crumb and Spain Rodrigues to recent figures such as Art Spiegelman, Lynda Barry, and Sue Coe. Jazzy graphic devices are employed to represent the work, including simplified animation and individual frames accompanied by the artists reading the captions and dialogue aloud, and the interviews are generally both lively and pertinent. Mann also gets a lot of amusing mileage out of archival footage of anti-comic-book propaganda from the 50s. One misses the kind of in-depth formal analysis given to comics by such overseas experts as Francis Lacassin, but otherwise Mann’s grasp of his subject is lively, penetrating, and affectionate. A Chicago premiere. (JR) (Music Box, Friday through Thursday, June 30 through July 6)