Alain Resnais’ comeback in 1974 after five years’ absence (precipitated by the commercial failure of Je t’aime, je t’aime), and like many other of his films, it has improved with age. Scripted by Jorge Semprun (La guerre est finie, Z), it tells the true story of a notorious international financier (Jean-Paul Belmondo) whose ruin in 1933 led to a major political scandal and his own death. While the script isn’t always lucid — some attempts to counterpoint Stavisky’s destiny with that of Leon Trotsky, given political asylum in France during the time of the events covered, appear a bit forced — the power of Resnais’ evocative editing is as strong as ever. Using a gorgeous original score by Stephen Sondheim, elegant sets and locations, and beautiful color cinematography by Sacha Vierny, Resnais models his liquid, bittersweet style on Lubitsch, and the shimmering, romantic results are often spellbinding and haunting. With Anny Duperey, Charles Boyer (in what may be his last great screen performance), Michel Lonsdale, Francois Perier, Claude Rich, and, in an early cameo, Gerard Depardieu. (JR) 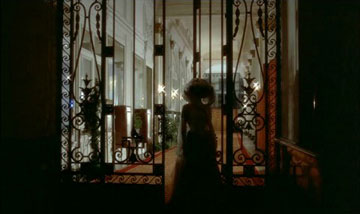 Street Of No Return 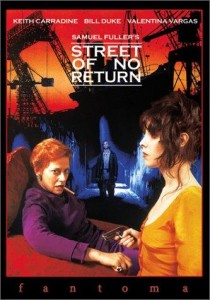 After the extensive recutting of his The Big Red One and the virtual shelving of his White Dog, American writer-director Sam Fuller reluctantly chose creative exile in Paris. In many ways the most elaborate and ambitious of his post-American features is this 1989 noir, an adaptation (by Fuller and producer Jacques Bral) of a David Goodis novel that was shot in Portugal. It stars Keith Carradine as a famous pop singer who winds up on skid row after he falls for a mysterious woman and gets his throat cut by her gangster boyfriend; much of the story is told in flashback after he’s arrested during a race riot. Recognizably (and enjoyably) Fuller-esque in its caustic violence, its punchy yellow-press dialogue, and its campy sensationalism, the movie is hampered — to the point of becoming weirdly discombobulated — by its use of Lisbon locations to stand in for American ones; the experience is every bit as disconcerting as Anthony Perkins’s American accent in Orson Welles’s version of Kafka’s The Trial. The singular vision of Fuller in his late 70s, tied as always to his passionate and radical view of the U.S.,… Read more »