The Wages Of Fear 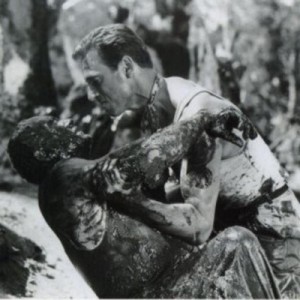 In Henri-Georges Clouzot’s 1953 suspense classic, four out-of-work Europeans (Yves Montand, Charles Vanel, Folco Lulli, Peter Van Eyck), trapped in a squalid South American village that’s exploited by a U.S. oil company, agree to drive two truckloads of nitroglycerine over 300 miles of primitive roads in exchange for $2,000 eachif they survive. When this existentialist shocker opened in the U.S., 43 minutes had been hacked away, but the gripping adventure elements left intact were still enough to turn the film into a hit. (This restored and at least semicomplete version of the film, 148 minutes long, was released in the early 90s.) A significant influence on Peckinpah’s The Wild Bunch, this grueling pile driver of a movie will keep you on the edge of your seat, though it reeks of French 50s attitude, which includes misogyny, snobbishness, and borderline racism. It’s also clearly a love story between two men (Montand and Vanel). In French with subtitles. (JR) 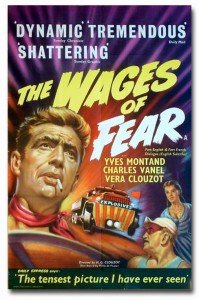