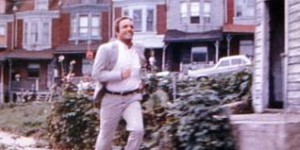 In retrospect, I’m sure that an important part of what excited me about John Updike’s second novel, Rabbit, Run, when I read it in high school circa 1960, was the fact that it was recounted in the present tense, thus giving it some of the immediacy of a movie—rather like the thrill of the opening chapter of William Faulkner’s Light in August, which I first encountered around the same time. As Updike himself later noted, the movieness of his present tense was a conscious strategy — he even thought of subtitling the novel A Movie — although ironically, it’s precisely this sense of now and its location in the Eisenhower era that is most conspicuously absent from Jack Smight’s flatfooted 1970 movie adaptation (available on DVD from Warner Brothers’ Archive Collection), which doggedly tries to be “faithful” in its own misguided fashion, even to the point of updating the action from 1959 to the present, but only comes across as conventionally shopworn as a consequence. What’s clearly lost isn’t only Updike’s sense of history, pop-culture references and all, but the vibrant weight of the eponymous hero’s existential decision-making.… Read more »