There are documentary filmmakers who plant their stakes within existing traditions and those for whom cinema has to be reinvented. Claude Lanzmann clearly belongs in the latter category. Of course cinema already had to exist in order to allow Lanzmann to make Shoah (1985) — named after the Hebrew word for annihilation — but he also had to rethink what cinema could be. His 550-minute examination of the Jewish Holocaust falls within the documentary tradition of investigative journalism, but what he does with that form is so confrontational and relentless that it demands to be described in philosophical/spiritual terms rather than simply cinematically. Determined to make us imagine the unimaginable, Lanzmann literalizes a quote from philosopher Emil Fackenheim: “The European Jews massacred are not just of the past, they are the presence of an absence.”

One could even describe Shoah as a kind of cruel but determined shotgun marriage between Judaism and existentialism — a match between Lanzmann’s sense of his tribal roots (having been born in 1925 to a French and Jewish family of Eastern European immigrants, and having joined the French Resistance at the age of 18) and his adopted intellectual roots (having become during his 20s both the editor of Jean-Paul Sartre’s journal Les Temps Modernes and the lover of Simone de Beauvoir). How does one negotiate between a religion founded on the dictates of the past and a philosophy founded on the needs and challenges of the present? First of all, in the case of Shoah, by refusing any historical or archival footage or narration, depending exclusively on interviews and footage shot in the present, either at certain key places where the Holocaust occurred (on the trains carrying Jews to the death camps, or at what remains of the camps themselves in Chelmno, Sobibor, Treblinka, Ausschwitz) or in other relevant locations in Wlodawa, Kolo, Berlin, Belzec, Warsaw — even, most memorably, in an Israeli barbershop. Secondly, by recording Lanzmann and others in their own languages (including German, Hebrew, Polish, and Yiddish) and including the translations into French, which are then subtitled in English in Anglo-American prints of the film. And thirdly, as de Beauvoir noted in her Preface to the film’s published text, by editing the sequences not according to any chronological order, but poetically. ‘To write poetry after Auschwitz is barbaric.’ Theodor Adorno once wrote, and Lanzmann’s singular achievement is to both challenge and corroborate that statement.    — Jonathan Rosenbaum 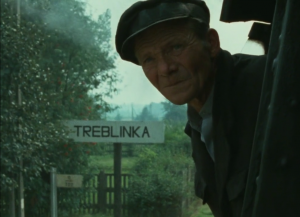 I regret the absence of any silent films (the first of which might be Vertov’s The Man with the Movie Camera), but I also lament having to exclude, among others, Michael Snow’s La région centrale (1971), Abbas Kiarostami’s Orderly or Disorderly (1981), Edgardo Cozarinsky’s La guerre d’un seul homme (1982), Robb Moss’s The Same River Twice (2003), and Adam Curtis’s The Trap: What Happened to Our Dream of Freedom (2007).