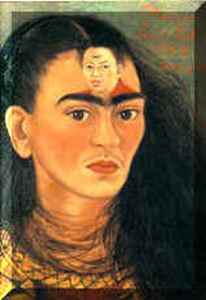 WOLF AT THE DOOR

We live in an increasingly visual culture, but there are signs that we haven’t quite got the hang of it yet. We still confuse image with event and one medium’s capabilities and limitations with another’s, falling into the trap of assuming that everything is seeable, hence realizable on a TV or movie screen. We still let our (not all that) new toys decide for us what it is we’ll say and how it is we’ll say it. Don’t believe the Sunday supplements: we won’t truly have entered the age of visual literacy until we can turn on the television in the evening and see not one single image of a politician waving from the doorway of an airliner.

When that day comes, we’ll probably discover that the film biographies of painters have vanished as well. And I doubt that we’ll miss them very much.

The problem lies in the differences between watching film and looking at a painting. Looking at paintings, like reading books, is an open activity offering a freedom of approach — an indefinite period of time, a choice of vantage points — that movies discourage (unless we watch them on tape, which converts them into ersatz paintings or books). You can film a painting, but when you’re done, your audience won’t be able to have the experience of looking at it as one looks at a painting.

What that means in practice is that films about painting invariably become films about painters, and that even as biographies they fail in a peculiar and endemic fashion — even such relatively distinguished examples as Lust for Life (Vincente Minnelli’s life of van Gogh), Moulin Rouge (John Huston on Toulouse-Lautrec) and Montparnasse 19 (Jacques Becker’s Modigliani). These artists all led interesting, even exemplary lives, but the fact is that they all labored long and hard to create work that would transcend the messiness and difficulties of their daily existences; and these respectful film treatments pay them the dubious honor of bringing their messes to the fore, and making their work the subtext of their difficulties — thereby inverting the priorities that make them important (if they are important) as artists.

Frida, a Mexican biopic about Frida Kahlo (1907-1954), and Wolf at the Door, a French-Danish coproduction about Paul Gauguin (1848-1903), fare a little better than the run-of-the-mill artist picture, probably because the colorful lives of these figures have an interest that for many people exceeds the interest of their work — or at least enhances it by providing a mythic context in which the work can be interpreted and appreciated. The same process that has given Hemingway and Fitzgerald a more important place in the public eye than Faulkner, and has made Sylvia Plath better known than Laura Riding, has granted these painters a reputation they probably wouldn’t have achieved through their work alone. Kahlo, the wife of Diego Rivera, crippled by polio and an early traffic accident, was a child of the Mexican Revolution, a passionate Marxist, a lover of Leon Trotsky and Isamu Noguchi, and a remarkable painter with certain links to Surrealism; she has only become well known fairly recently, with the publication of Hayden Herrera’s excellent biography and several retrospectives of her work. Gauguin — whose fame began much earlier, around the time of his death — grew up in France and Peru, joined the merchant marine at 17, and was a successful stockbroker in France for 11 years, before leaving his job to paint full-time. After exhausting his savings in Rouen, he spent periods in Paris, Brittany, Martinique, Panama, Copenhagen (where his Danish wife and children were forced to relocate), and Arles (where he briefly stayed with van Gogh), eventually leaving his family for good to settle in Tahiti. 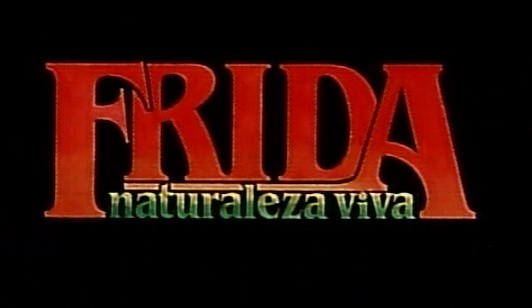 Both of the new films work conscientiously at creating visual environments in which the paintings of their subjects can be centrally located and integrated. Framed like mosaics, they dwell on the spaces in which their artists worked, and strive to give these spaces the same range of colors and textures as the canvases produced within them. The national identities and narrative strategies of these movies play a significant role in this process, for better and for worse. A Mexican independent feature, Frida wears its nationality like a banner — a reasonable stance considering the degree to which Kahlo was steeped in Mexican culture and folklore, but one that necessarily minimizes all the elements that made her into an international figure. One could never guess from this movie that she was a friend of André Breton, or that the first major sale of her paintings was to Edward G. Robinson; the extended visits Kahlo and Rivera paid to the U.S. in the early 30s are virtually skipped over, and while her 1932 miscarriage is depicted in graphic detail, the fact that it occurred in Detroit is omitted. 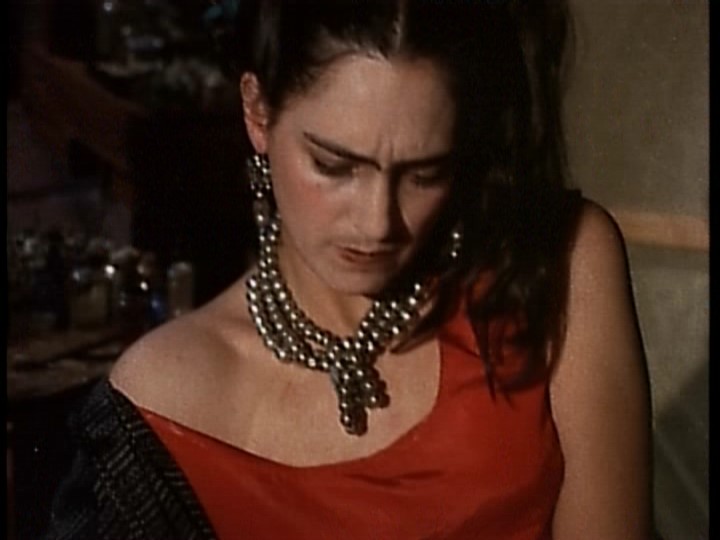 The film ranges freely across the entire span of Kahlo’s life, viewed in fragmentary flashbacks from her deathbed. But because director Leduc chooses to approximate the achronicity of memory by showing certain portions of her life out of order — settling on a more consecutive approach only in the film’s second half — he has to make an uneasy alliance between elliptical suggestions and lucid explanations. Keeping dialogue to a minimum, he aims for a meditative concentration on Kahlo’s universe as a continuous whole, inviting the spectator to fill in the missing pieces. What emerges from this method is a series of rather selective snapshots, intermittently accompanied by descriptive captions. Kahlo’s bisexuality, for instance, is alluded to in one passionate kissing scene, while her affair with Trotsky is handled so prudently that viewers may wonder whether it actually took place. On the other hand, the overall strength and dignity of Kahlo’s personality registers throughout, and the aspects of her life and work that make her interesting to feminists are treated with some seriousness. 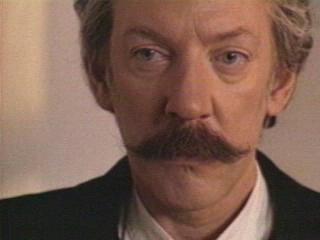 Wolf at the Door limits itself to Gauguin’s abortive return to Europe in 1893-94, between his two extended sojourns in Tahiti. Much of the action is narrated by and seen from the vantage point of Judith (Sofie Graboel), a 14-year-old neighbor in Paris who is smitten with him. Unlike Frida, Wolf is international to a fault: it was set mostly in France, shot in Denmark, and acquired its star, Donald Sutherland as Gauguin (director Carlsen’s first choice), only after the original French script, by Carlsen and Jean-Claude Carrière, was rewritten in English by Christopher Hampton. The resulting gain in mass appeal has to be weighed against the loss in specificity, and the English dubbing of at least one of its actors — Fanny Bastien as Juliette, Gauguin’s former model and mistress — is drastically out of sync.

Many of Carlsen’s other decisions are at once novel and sound. The film concentrates largely on economics and dwindling fortunes, central concerns of artists’ careers that are usually neglected (although Chronicle of Anna Magdalena Bach and the aforementioned Montparnasse 19 both spring to mind as precedents). The decision to let Tahiti appear only in Gauguin’s utopian reveries and canvases allows us to regard his life as part of a philosophical debate about civilization; the other side is mainly represented by Gauguin’s friend the playwright August Strindberg — portrayed with owlish wit by Max von Sydow. The debate is of course loaded in Gauguin’s favor, as is reflected in the film’s title, which refers to a parable about a starving wolf who refuses a fat dog’s invitation to join him in his comfortable household as soon as he glimpses the dog’s collar. But the dialogue, drawn in part from letters and journals, has flashes of insight that go beyond polemics. (Recalling his relationship to van Gogh at one point, Gauguin remarks, “He taught me a chair could be tragic; I taught him why.”)

On the other hand, Carlsen seems to have axes to grind that relate to Gauguin only obliquely: he seems, for instance, to be settling accounts with his native Denmark when he vitriolically portrays Gauguin’s wife, Mette (Merete Voldstedlund), as a spiteful monster of repression. Admittedly, Gauguin himself was outspoken in his disdain for Danish society after he left for Tahiti; but the fact that he remained with his wife as long as he did, and corresponded with her for the remainder of his life, suggests a stronger bond between them than anything implied in the film. Indeed, the principal drawback of Carlsen and Sutherland’s Gauguin is that, although he registers more subtly and less coarsely than Anthony Quinn’s Method Gauguin in Lust for Life, he still appears so footloose and out of control that it becomes almost impossible to fathom the stockbroker and family man he once was. (Significantly, the film has only one minimal flashback to cover Gauguin’s first 40-odd years, more elliptically synecdochic than anything in Frida.)

More generally, the treatment of all four women in Gauguin’s life during the period covered — Judith, Mette, Juliette, and Annah (Valerie Morea), his Javanese mistress and model — is relentlessly misogynistic. Carlsen disguises this somewhat by juxtaposing Gauguin’s female worship with Strindberg’s overt hatred of women, but around the edges of this movie lurks a condescension toward and lack of curiosity about its female characters that restricts our sense of Gauguin as well. So much is made of his status as great phallic power — from the sculptured penis in his studio lovingly fingered by Judith to the orgasmic cries of Juliette and Annah during his bouts of lovemaking with them (naturally not accompanied by any sounds from him) — that his eventual refusal to add Judith to his sexual roster is made to seem like the ultimate Christian sacrifice.

Most biopics about painters are accounts of painful, heroic struggles, and Kahlo and Gauguin both certainly led lives that warrant such a treatment. Perhaps the crucial difference between them is that Kahlo represented these struggles directly in her work, while Gauguin constructed a paradisiacal world designed to expel them. If Frida works within its chosen restrictions as a version of what Kahlo achieved, Wolf at the Door succeeds within its own limitations in showing what Gauguin left behind.