This was the first long review I wrote for the Chicago Reader after I started working there, but its publication was delayed for almost a couple of months until October 30, 1987 because the film was pulled from distribution just before we were going to press.  — J.R. 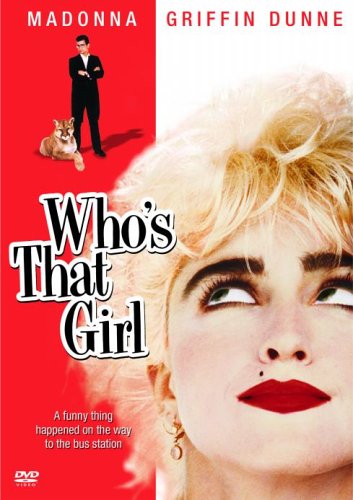 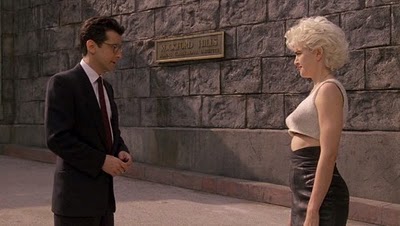 The current spate of recycled movies is only the latest stage in a process that has been in force for almost three decades, ever since the French New Wave launched the idea of a self-devouring cinema. Broadly speaking, the movement started out as esoteric polemical criticism (in print and on-screen) in the 60s, gravitated toward name-dropping and flag-waving testimonials in the 70s, and has finally degenerated in the 80s to an insidious kind of self-censorship that uses the past — and a severely delimited version of it at that — as a kind of stopper to prevent too much of the present from leaking through.

It’s a cynical truism of journalism that any story with 100 percent new information is virtually unusable. In order to provide the reader or spectator with a safety net, most of the story has to be based on old information, even if much of that old news turns out to be out of date or false. At the same time, our casual skepticism about most of what we see has grown to such a degree that, paradoxically, a disbelief in movie plots almost becomes a prerequisite for enjoying them. Our movie past is made to seem comfortable because it suggests familiar territory, a kind of deception we feel safer with because we know in advance that it’s false. And if certain kinds of social commentary are beginning to creep back into commercial movies, they are usually coming in through the back door of nostalgia, as if to protect us from their potential sting    — and perhaps protect themselves from the challenge of directly addressing us.

Who’s That Girl, Madonna’s third feature (which died a quick death in first run two months ago and is only now making a reappearance), has enough giddy nostalgia to sink a battleship — a fact that in this case works as a partial blessing as well as a curse, because a figure like Madonna works almost exclusively on the level of myth. It’s a movie that devours other movies the way that some music videos do, but unlike the latter, it manages a critical update on some of its sources. For starters, the movie is a remake of Howard Hawks’s celebrated 1938 screwball comedy Bringing Up Baby, which was already remade as What’s Up, Doc? by Peter Bogdanovich in 1972. The use of Griffin Dunne as a yuppie hero — yanked out of his tight schedule and complacent surroundings into a darker side of Manhattan by a dangerous female — naturally summons up After Hours, while related aspects of plot and character — including Madonna’s clothes, makeup, and hairdo — remind us of Melanie Griffith and Jeff Daniels in Something Wild. To compound the brew, Madonna has remodeled her persona not only by enlarging her eyebrows, but more generally by borrowing traits from Marilyn Monroe and Mae West (among others), while an early scene shows her ritualistically kissing posters of Elvis Presley (in Jailhouse Rock) and Marlon Brando (in The Wild One) as she leaves her prison cell. 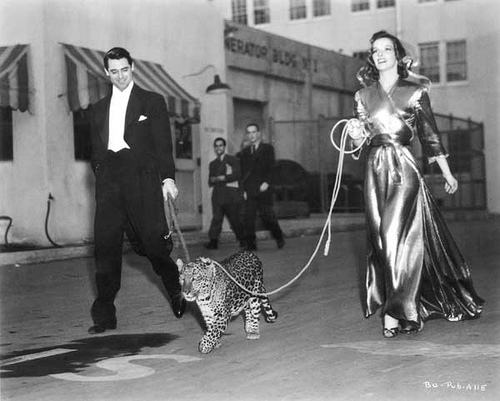 What is one to make of this top-heavy, intertextual smorgasbord? For one thing, the by-now encrusted social values of Bringing Up Baby are neatly inverted to stand the Hawks movie on its head. In the original, the life-affirming zaniness and irresponsibility of Katharine Hepburn, which lures Cary Grant away from a loveless potential marriage and a sedate existence as a bemused paleontologist, is partially predicated on the fact that her character is dripping with wealth, making her sense of fun and freedom an implied privilege of the leisure class. Bogdanovich pushed this implication further in What’s Up, Doc? by making ordinary workers the fall guys in most of the slapstick gags. But Who’s That Girl reverses the pattern by making the heroine a working-class punk thief, and getting nearly all of its best laughs out of ridiculing the pretensions of the rich. From this standpoint, the freakish affectations and inane dialogue of Haviland Morris as Wendy Worthington, Dunne’s superwealthy bride-to-be, are among the movie’s comic inspirations; whether she’s trying desperately to buy her way into a co-op (undeterred by being bound head to foot and held as a hostage) or using Burt Bacharach lyrics as an inspirational text for her wedding ceremony, she’s a dead-on parody of the same upper-class attitudes that Hawks and Bogdanovich tended to embrace uncritically. 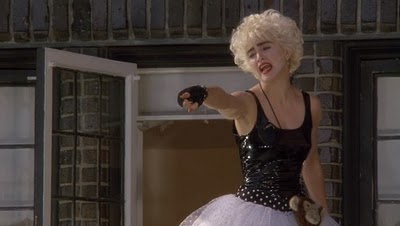 As if in response to Pauline Kael’s comparison of Madonna’s first feature, Desperately Seeking Susan, to rotoscope animation, Who’s That Girl opens with a cartoon Madonna breaking through the Warner Brothers logo, and behind the credits, in UPA-style animation, we follow her character, Nikki Finn, through an intricate series of events — the movie revels in Rube Goldberg gag constructions — culminating in her being framed for the murder of her boyfriend and sent to prison. Four years later, in live action, we see her getting paroled, and from her first wisecrack about copping some mascara, she’s no more real than her cartoon self. Dressed in tight, short black skirts and pedal pushers when she’s out on the street, she walks like electrified jello and talks like Betty Boop with adenoids; but when she’s supposed to come on as slow, sultry, and romantic in a lush white evening gown and sleek penthouse, the effect seems forced, as if she’s a little girl trying on grown-up clothes.

Loudon Trott (Griffin Dunne), a yuppie attorney, has just been assigned to deliver a snarling cougar to an eccentric client (John Mills) when Wendy’s father (John McMartin), his boss, asks him to drive Nikki from prison to the nearest bus station, whence she is expected to return to her mother in Philadelphia. (It takes most of the movie to explain why Worthington wants Loudon to perform this task, but ordinary plot coherence isn’t one of the movie’s strong points.) Insisting on driving the Rolls Royce convertible that Loudon has borrowed from his mother, Nikki quickly befriends the cougar, carries Loudon along on a shoplifting spree through a mall, and after a reckless driving spree that temporarily lands Loudon in the hospital (as a ploy for avoiding a traffic violation) continues to Harlem with his credit card, purchasing a gun from a bombed-out fence in order to confront the pimp who helped frame her. 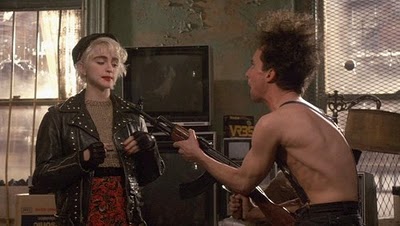 The movie’s press book boasts that four cougars and four Rolls Royces were needed to shoot the madcap chases, and in a way the symmetry seems appropriate: the cat and the car represent the polar opposites in the film’s moral universe. If the cougar replaces Bringing Up Baby‘s leopard while the Rolls more or less does duty for Cary Grant’s reconstructed dinosaur skeleton, Nikki Finn, who treats both like playthings, assumes the spiritual function of Katharine Hepburn while jettisoning most of her personality. As a creature of myth as contrived as her name, she can locate herself in a gallery of other star icons and deck herself out with assorted punk accoutrements, but she can’t register as someone with a social background like the other characters in the movie. It’s a given that the movie never shows us her home or mother in Philadelphia; if it did, her mythic aura would be seriously compromised.

The freedom represented by Madonna’s persona has something to do with the freedom of little boys that little girls envy — which helps to explain the Presley and Brando posters (and the fact that she slugs a prison guard as soon as she’s free). This doesn’t exactly square with her powers as a mythic goddess — such as her capacity to tame and train the cougar, which all the other characters lack, or her ability at one point to convince a bus driver to make a U-turn on an expressway — but as Richard Dyer and other critics have noted, stars are able to contain and apparently resolve the sort of contradictions that we never could accept in ordinary actors. (Consider Monroe’s Lorelei Lee in Gentlemen Prefer Blondes, equally dumb and conniving.) Nikki’s charisma is based on her talent for suggesting mythic alternatives to Loudon and the other characters, but because many of these alternatives are mutually exclusive — Monroe’s softness, West’s toughness, Betty Boop’s naivety, Brando’s street smarts — they don’t add up to a single character who can plausibly share space, much less a philosophy or a romance, with anyone else on the screen.

Significantly, Madonna’s first appearance in Desperately Seeking Susan shows her alone in a hotel room with a sleeping boyfriend, lying on her back on the floor while taking an instant snapshot of herself. What she shares, in fact, with her gallery of icons is the irresponsible pleasure of narcissism — a carnal delight compared to the more superficial kinds of self-regard displayed by the film’s other characters, which Nikki Finn serves to rebuke. As with the French actress Bulle Ogier, whom Madonna intermittently resembles here in her figure and dreamy expression, her special terrain is the autistic fantasy. And some of this movie’s happiest screwball moments seem to come from the efforts of writers Andrew Smith and Ken Finkleman and director James Foley to reflect aspects of her character in the world that surrounds her, as if to suggest that she dreamed them up: a group of black kids joyously trashing and decorating the Rolls parked in their neighborhood; three separate taxi drivers who tell Loudon that they’ve “had” his fiancee (in the biblical sense) in their cabs; a populated rain forest inside a Manhattan penthouse. Trying to be as recklessly random as its heroine, the movie takes on ideas that tend to be hit or miss, but the direct scores are more gratifying than most because of the manic risk taking involved. Every character, no matter how minor, is treated like a wild card, as if to ensure that Madonna remains the only ace in sight. 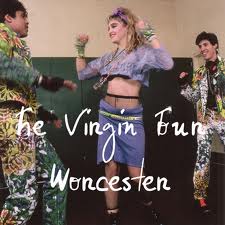 Clearly she needs these jerry-built vehicles in order to maintain the coherence of her own jerry-built identity. As a very Catholic Antichrist, in love with theatrical ritual and decoration, she thrives on these surrounding details in much the same way that she uses two dancing boys, with matching cross earrings, to flank and mirror her movements like supporting brothers in her video, Madonna–The Virgin Tour Live. But as adept as Griffin Dunne often is with physical comedy, his role as a social type exiles him into a different movie as soon as the pair become romantically attached. As long as they’re dialectical, antagonistic opponents, they make a volatile team; but the strength and limitation of Madonna as a myth is that she ultimately stands alone. 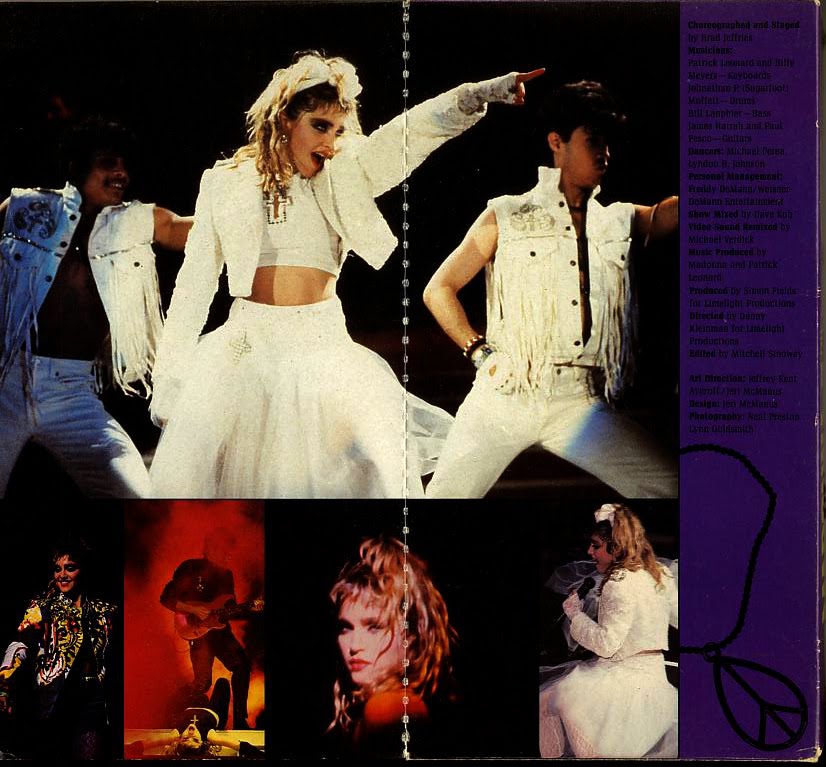