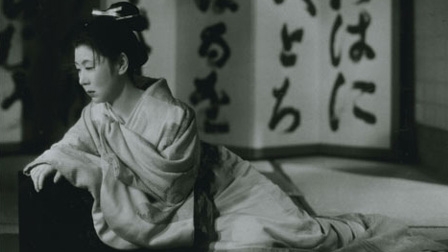 According to scriptwriter Yoda Yoshikata, Mizoguchi’s ambitions for The Life of Oharu were largely stimulated by the prize accorded to Kurosawa, a relative newcomer, for Rashomon at Venice in 1951. The bet paid off, and Oharu was awarded the Silver Lion at Venice in 1952, thereby inaugurating Mizoguchi’s international reputation at the age of fifty-six, four years before his death. Differing substantially from Saikaku’s novel –- a looser collection of episodes narrated by an elderly nun recalling her decline from a promising youth, and ending with a scene of a prostitute entering a temple and hallucinating the faces of former lovers in the idols there -– Oharu’s script gravitates round the feudal persecutions of one woman. It appears that Mizoguchi was something of a Stroheim on the set -– requiring that the garden of  Kyoto’s Koetsu temple be “rebuilt” instead of using the nearly identical original location, and firing his assistant, Uchikawa Seichiro, when the latter complained about making last-minute changes in the positions of the studio-built houses for the scene of Bunkichi’s arrest.… Read more »