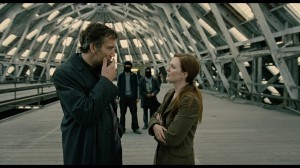 Adapted from P.D. James’s dystopian novel, this SF feature by Alfonso Cuaron (Y Tu Mama Tambien) takes place in England in 2027, when the human race has mysteriously become infertile and faces extinction. A onetime revolutionary (Clive Owen) is asked by an old flame (Julianne Moore) to take part in her underground movement defending illegal aliens, who are trucked off to concentration camps; assisted by an older hippie pal (Michael Caine in an Oscar-worthy performance), he agrees to smuggle a young woman (Claire-Hope Ashitey) out of the country. The film gradually devolves into action-adventure, then the equivalent of a war movie. But the filmmaking is pungent throughout, and the first half hour is so jaw-dropping in its fleshed-out extrapolation that Cuaron earns the right to coast a bit. R, 108 min. (JR) 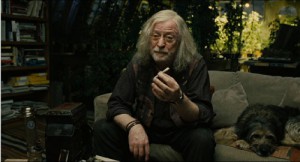