Theme and Variations [THE LOVERS OF THE ARCTIC CIRCLE]

The Lovers of the Arctic Circle

Directed and written by Julio Medem

Julio Medem’s fourth feature is a love story spanning 17 years — from the time Otto and Ana first meet, as children in a Spanish school yard, to their improbable reunion in the wilds of northern Finland when they’re 25. But the film starts at the end rather than the beginning, and like the names of the two characters, the story can be read backward as well as forward. That story is told by Otto and Ana in alternate bursts, inflected mainly by how Otto views Ana and vice versa, skipping back and forth in time. To make things trickier, the two versions of what happens are sometimes at variance.

When The Lovers of the Arctic Circle joined Open Your Eyes at the Fine Arts last week, it became possible to conclude, with a sigh of relief, that the age of Pedro Almodovar was finally over. I don’t mean that Almodovar won’t continue to make movies or get American distribution, but that his brand of smart-aleck entertainment will no longer have to stand for the whole of Spanish cinema.

The cultural isolation of Americans has created numerous ridiculous shorthand notions of what constitutes a national cinema. Taiwanese cinema is one of the richest on the planet, but we’ve been stuck with only Ang Lee. Chen Kaige and Zhang Yimou are just about our only guides to one-fifth of the world’s population, and the Kaurismaki brothers are relied on to define the Finnish soul (which they tend to do from A to B). Likewise, the relatively awful meanderings of Almodovar — less funny than John Waters and less artful than Rainer Werner Fassbinder, though teeming with somebody’s idea of hip fashion — have demarcated what we’re supposed to know about Spanish life in the 90s. It was bad enough when Luis Buñuel, a great director, had to serve as the only messenger from Franco’s Spain. But when Almodovar, along with Carlos Saura, was expected to deliver all the essentials of post-Franco Spain, it was almost easy to conclude that Spanish cinema no longer existed. Admittedly, Almodovar’s pranks had a certain party flavor, but his aesthetics were so threadbare and his sense of character so cartoonish and limp that the National Review‘s John Simon wound up defending Tie Me Up! Tie Me Down! only because its nastiness honored his own misogyny.

Obviously, two movies don’t constitute a trend, but one of the few things Open Your Eyes and The Lovers of the Arctic Circle have in common is that they hold you in your seat no matter how often they veer off into cockeyed fantasy. The psychological fantasy-thriller Open Your Eyes, for all its trashy fun, winds up a disappointment because its denouément is downright stupid, but the artier The Lovers of the Arctic Circle — shot in eye-filling ‘Scope and never difficult to follow as a narrative — may be too intelligent for its own good as a commercial venture. I like it much more than Open Your Eyes because it doesn’t play the virtual-reality card — the current cop-out that turns every potential mystery into a dream or movie effect (as in The Matrix, Open Your Eyes, most of the oeuvre of Brian De Palma, and even eXistenZ). Instead it postulates reality as both recognizable and intractable, full of coincidence as well as contradiction, simultaneously in your face and out of reach.

When Otto and Ana first meet, Ana’s father has just died in a car crash and Otto’s parents are separating. Ana initially perceives Otto as a sort of reincarnation of her father, and she brings about a meeting between her mother and his father, who soon become a couple. Otto and Ana are subsequently brought up as brother and sister, Otto living with his mother but visiting his father on weekends, but when they reach their teens they secretly become lovers.

The movie is Spanish to the core, including the incestuous undertones of the love story, and it’s clearly a highly personal work (Medem, whose surname is a palindrome like Otto and Ana, dedicates it to his father). Part of what excites me about the film –a part from its fluid, poetic style — is the way it evokes the radical rhyme effects, temporal disjunctions, and crisscrossing destinies of Alain Resnais’ first two features. Resnais’ latest feature, On connait la chanson (Same Old Song, 1997), the biggest hit of his career, still hasn’t opened commercially in this country, yet the impact of Hiroshima, mon amour (1959) and the even more radical Last Year at Marienbad (1961) when they hit the world market, including the U.S., was enormous. The first film was written by Marguerite Duras and the second by Alain Robbe-Grillet, and part of what made them so controversial was the way they popularized the nouveau roman, a French movement in experimental fiction that had previously been noticed outside France only in certain intellectual circles. Resnais brought to that movement’s innovations his brilliance and precision as a filmmaker. But both movies were also passionately romantic — one concerns the love affair between a Frenchwoman and a Japanese man in postwar Hiroshima, the other the elaborate seduction of a Frenchwoman by an Italian man at a German spa and chateau — and both essentially reinvented the flashback by placing subjective memories and daydreams on the same level as everyday reality.

Hiroshima, mon amour conflated past and present within the same continuum of consciousness; Last Year at Marienbad went further by stirring past, present, and future conditional, as well as fantasy projections into the mix. Both unraveled like hypnotic fever dreams punctuated by abrupt shocks and transitions — the influence of Hollywood melodramas and Hitchcock thrillers on each was unmistakable. Audiences tended to be more primed for this new kind of film experience than most critics, who had the unenviable task of trying to describe these voluptuous adventures in terms of rational, linear synopses. When their standard critical tools failed to account for Resnais’ accomplishments they often turned suspicious and resentful, and their rejection prevailed over audience rapture in most critical accounts of those films (Pauline Kael was responsible for the most thorough and influential of the attacks on both films). Of course some conservative viewers and some open-minded critics were exceptions to these generalizations, but the sensual and emotional experience of the films tended to be overlooked because they confounded the standard notion that unconventional art movies are supposed to be cold and intellectual.

The plot of The Lovers of the Arctic Circle isn’t much harder to follow than those in Hollywood blockbusters. But my synopsis recounts only portions of the story and reconfigures them in chronological order. The film skips freely back and forth across 17 years and between separate versions of the events, but the story can’t be recounted that way in prose without seeming obscure — though Medem’s use of sound and images to relay the same information is crystal clear. But then, if one tried to encapsulate the movie only in terms of images rather than events, one would wind up with something closer to a list than to a sensual experience.

As a boy, Otto is obsessed with airplanes — “Otto-pilot” provides a pun in the subtitles, also a play on words in Spanish — and a fleet of paper gliders he sends out the window of his school’s bathroom, each bearing the same message, indirectly leads to his father meeting Ana’s mother. Airplanes are among the many recurring images in the film, along with reflections, gas tanks running empty, female characters falling down, cars stopping abruptly to avoid collisions with buses, and circles, including the arctic circle. One of Otto’s paper gliders carries a message from him to Ana, which Ana’s imagination converts into a message from Otto’s father to her mother, and Ana’s own message of sexual and romantic invitation to Otto as a teenager, “Be brave!” is eventually reprised as a message to Otto as an adult, unknowingly carried by him back to Spain from the arctic circle. I hope this is clear; the movie says it much better.

We’re never told what the message is that Otto writes on all his paper gliders, which may be irritating to some viewers, just as the conundrums created by separate versions of events from the viewpoints of Otto and Ana may be frustrating. (For instance, Otto has a serious ski accident, with markedly different outcomes in each recounting of the event.) Variations on events are presented from the beginning, and not all of them correspond to the separate perceptions of Otto and Ana; early on Otto tells us how he met Ana by chasing a soccer ball out of the school yard, and then imagines what might have happened if the soccer ball hadn’t left the school yard. This favoring of the conditional tense is as radical in its implications as the conditional tenses of Marienbad, and as in Marienbad, the difficulty is that we don’t always know what’s conditional and what’s not.

That’s why we’re brought up short when the film ends with two versions of the lovers’ climactic reunion in the arctic circle, labeled “Ana’s Eyes” and “Otto in Ana’s Eyes.” In the first version, after many delays, they’re happily reunited; in the second, Ana gets hit by a bus and killed just as Otto is rushing to meet her. If Medem had reversed the order of these sequences, we could leave the film with a sense of satisfactory closure, rationalizing the tragic outcome as what might have happened and the happier ending as what really happened. By putting the tragic version last, Medem makes it harder to rationalize, though the only thing that makes it “truer” than the happier version is the fact that it’s the last event we see. A colleague of mine believes the film fails because of this ending, and I confess I had some doubts the first time I saw it. But the second time I felt that the tragic ending wasn’t so much conclusive as a radical way of yanking me back into the movie; the result wasn’t a cynical form of postmodernism but a more complex engagement with the story. After all, circles don’t have endings — and reality, unlike cinema, doesn’t end. It’s movies and moviegoers who do all the stopping and starting. 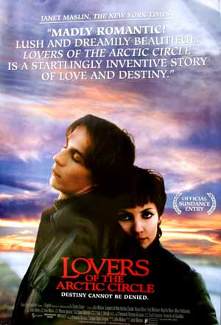