Life and Death in China [THE DAY THE SUN TURNED COLD] The Day the Sun Turned Cold

Directed and written by Yim Ho

A striking moment in Mina Shum’s Double Happiness — a recent Canadian feature about an aspiring young actress in a North American city — reveals something about our attitudes toward Chinese culture. The Chinese-American heroine is auditioning for a small part as a waitress in a TV movie. After she runs through her lines, her prospective employers ask how good she is with accents. Pretty good, she replies; at this point we’ve already heard her southern drawl, and now she asks them in a French accent what kind of accent they want — French, perhaps, or something else? There’s a long, embarrassed silence, until she figures out that they want her to speak with a Chinese accent. She promptly does so, and with the same exaggeration she’d given her Southern Belle and Basic Frog. She immediately gets the part.

When Chinese movies audition for release in the North American market, I’m afraid the same sort of unspoken rules apply. To put it metaphorically, we want our Chinese movies to have Chinese fortune cookies in them — even though the fortune cookie is a Western invention, something that people in China have never eaten with their meals. Judging from the Chinese cinema admitted into our mainstream, what we expect is either something opulent and spectacular set in the past or something bloody, balletic, and campy set in the present. The prospect of a movie about contemporary life in China seems about as uncommercial as — why deny it? — a movie about contemporary life in the United States.

Perhaps this helps explain why Yim Ho’s The Day the Sun Turned Cold, an unusually gripping Chinese murder mystery and melodrama set only five years ago, was picked up by Kino International rather than Miramax, and why it’s been getting scant attention from the tastemakers who’ve made big meals out of Farewell My Concubine, Raise the Red Lantern, The Blue Kite, and various John Woo bullet pies. Yim’s movie is something of a shocker: it tells the story of a 24-year-old factory welder (Tuo Zhong Hua) who brings formal charges against his mother (Siqin Gowa) for having murdered his father (Ma Jing Wu) ten years earlier. But one gets the impression from some American reviewers that this kind of shocker isn’t what we want or expect from the Chinese, perhaps because it sounds too much like one of our own sordid news stories. (One shortsighted New York critic even went so far as to call this picture “misogynist” solely on the basis of its plot, overlooking the fact that Yim goes out of his way to make the homicide understandable: the husband abuses and exploits his wife.) Good crime melodramas aren’t all that common nowadays, and we should treasure them wherever we find them.

In fact, the movie that The Day the Sun Turned Cold most resembles is not any other Chinese feature but the similarly underrated Dolores Claiborne. But I don’t mean to imply that Yim’s movie doesn’t have a lot to say about present Chinese culture. For one thing, this Hong Kong feature is set and principally shot in mainland China — one of many recent films that show an increasing interaction between Hong Kong, Taiwan, and mainland China, transforming Chinese cinema as a whole. (This trend is largely the result of two factors: the prospect of Hong Kong reverting to mainland control in 1997 and the recent near collapse of the Taiwanese and Hong Kong film industries.) For another thing, The Day the Sun Turned Cold is based on an event that took place in China only five years ago.

Born in Hong Kong in 1952, Yim Ho attended the London Film School in his early 20s before returning to work in television in Hong Kong as a producer, screenwriter, and director (he also assumes all three roles on The Day the Sun Turned Cold). Between 1975 and 1977 he directed several one-hour TV dramas, most of them in 16-millimeter, that garnered him a lot of attention. In 1978 he set up a production company with two fellow filmmakers and shot his first feature, a comedy about movie extras that was a critical and commercial success. After making two more features in the early 80s, both for Hong Kong’s Golden Harvest studio, and writing a Cantonese stage adaptation of Eugene O’Neill’s Desire Under the Elms, which he directed in 1983, Yim directed Homecoming (1984, see above), the first of his movies that I’ve seen — a touching, delicate story about a Hong Kong businesswoman in her 30s returning to her village in southern mainland China and trying to renew her relationship with a childhood friend, now a farmer’s wife and school principal. (The friend was played by Siqin Gowa, the mother in The Day the Sun Turned Cold.) Then came Buddha’s Lock (1984), King of Chess (1989, see first photo below), and Red Dust (1990, see last two stills below). I’ve only seen King of Chess — which was partially reshot by its producer, Tsui Hark, before it was released in 1992 — but a couple of Chinese friends have advised me that I’ve seen Yim’s best work. 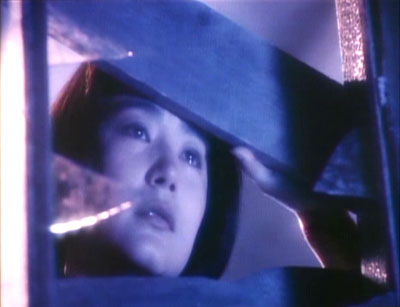 The parallels with John Frankenheimer in the 60s — who also cut his teeth directing live TV dramas, many of them first-rate, for Studio One and Playhouse 90 — are striking. Like Frankenheimer, Yim is adept at working with actors and at fashioning an imaginative, resourceful mise en scene in relation to both actors and sets. (He also shows the influence of the French New Wave as well as such neo-Freudian Hollywood directors as Elia Kazan and Nicholas Ray.) On the debit side, again like Frankenheimer, Yim seems to be at the mercy of his material. Most of the time it’s been furnished by other writers, but Yim himself wrote The Day the Sun Turned Cold, dramatizing and extrapolating from the news story. (“Many of the dialogues,” he has said, “were taken directly from official documentation.”) 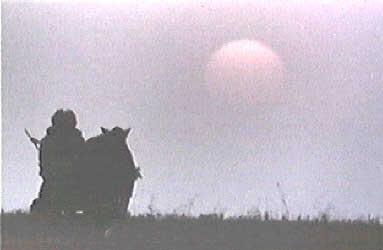 There’s nothing at all pretentious about this film’s style, which comes in part from exquisite lighting, resourceful framing, and naturalistic acting. But Yim is tackling a story that borders on Greek tragedy in its theme: blood ties are placed in direct conflict with justice. Recounted mainly in a series of flashbacks, the movie is set in an impoverished valley in northeast China where the cold, harsh wintry climate has virtually permeated the landscape. In the opening the hero — the only member of his family to have left the valley — is telling a skeptical but sympathetic police captain (Li Hu) why he thinks his mother poisoned his father ten years ago. (Readers who don’t want to learn the rest of the plot should stop here.)

The son has waited a full decade to bring charges because he only recently read about a Frenchwoman poisoning her husband by putting arsenic in a bowl of milk, claiming that the white powder was sugar. In 1980 he’d seen his mother sprinkling white powder on chicken, claiming it was MSG; shortly afterward his father became seriously ill and was taken to the hospital. The son insists that he doesn’t hate his mother, despite the fact that he’s bringing charges against her; he says he considers her a good woman and merely wants to see justice done regarding his father.

The film doesn’t make it clear whether he’s telling the truth or not, but it shows us enough of his behavior to make it obvious that he feels conflicted about his actions. He may be fighting a childhood identification with his mother: in one flashback his father first beats him (for playing hooky and lying about it) and then his mother (for “spoiling” their son) in swift succession. After the son brings charges against his mother, a younger sister angrily tells him that he’s selfishly victimizing the rest of the family; because of the scandal, she’s unlikely to get a marriage proposal in that area. It’s one indication of the film’s measured ambiguity that the son’s indifference to his sister’s fate isn’t explained or rationalized. Another layer of ambiguity comes from the filial bond formed between the police captain and the son, suggesting that gender loyalties play a role in the son’s motivations as well.

“This is a story about the love/hate relationship between a mother and her son,” Yim has said in a suggestive, if rather open-ended, statement. “I would expect some of the audience to dispute the conclusion of the film. I won’t be surprised if they would regard the ending as being very un-Chinese. This is a challenge, one of cultural identification, which I’d like to present to these audiences….How should the son treat his mother if he loves and hates her so much? Should he act according to the law of the society? Or should he be a rebel son of the Heavenly Kingdom and defy its law?”

The flashbacks make it clear that the son’s parents were separated by a cultural gulf and not at all happily married. The father was a stern school principal, the mother an illiterate bean curd seller unable to contemplate a legal separation because of the shame attached to divorce in their village. Significantly, we learn much more in this movie about her daily life than we do about her husband’s, which may be the result of the narrative viewpoint — the son spent more time with her as a child than with him. But even though this is a film at least partly about justice, it seems more the story of the mother than of the father. The film shows us a fair number of the steps involved in the preparation of bean curd, and we also see the son at 14 (Shu Zhong) accompany his mother to the marketplace. On one such trip he and his mother are blown off their cart during a storm, and a woodcutter (Wai Zhi) saves their lives. The father gratefully invites him to dinner, and not long afterward the woodcutter and the mother have become lovers; shortly after the father dies, they get married.

Eventually we discover that the son was perhaps involved in the murder of his father, by telling him about a secret meeting between the mother and the woodcutter, setting off the crisis that leads to the poisoning. But to Yim’s credit, he doesn’t try to resolve the knotty problems of blame, responsibility, and justice raised; he merely does a masterful job of telling us what happened and asks us to ponder the people and the issues. We may choose to regard The Day the Sun Turned Cold as an art movie or a genre exercise — truthfully, it can easily be seen as either one — but certainly a film this entertaining, even mesmerizing, surpasses the standards of most current Hollywood story-telling.